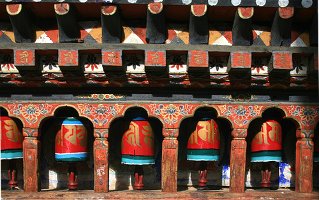 Dzongkha is the third fragrance in the L'Artisan Parfumeur travel series that includes Bois Farine and Timbuktu. Dzongkha was developed by perfumer Bertrand Duchaufour, and was inspired by the Dzongs of Bhutan. The fragrance notes include peony, lychee, cardamom, tea with milk, vetiver, incense, cypriol (a grass used to make papyrus), cedar, leather and iris.

Dzongkha was one of the few fragrances that I was really looking forward to this year, and I am happy to report that it did not disappoint, in fact, I like it even better than I expected. It is heavily dominated by iris, one of my favorite notes; iris is listed in the heart and base notes but is evident almost from the first, along with sweet floral notes that I would never have identified as peony. For that matter, I wouldn't have picked out the lychee either.

As it settles, it gets drier and earthier and takes on a subtle little buzz of spice from the cardamom. The iris stays velvety-cool in a way that nicely evokes the stones of a temple in a far-off land, as advertised. It is an odd fragrance (in the best possible way), but not quite so odd or hard to wear as Timbuktu, the other Bertrand Duchaufour fragrance in this series. Fans of Timbuktu, and of Duchaufour's Paestum Rose for Eau d'Italie, will recognize some common notes, especially in the dry down; of the three, I will say that Paestum Rose is the most easily wearable, Dzongkha the most otherworldly, and Timbuktu handily retains its title for outright weirdness. Meanwhile, Bertrand Duchaufour is fast moving up the list of my favorite perfumers, and I am very much looking forward to his new scents for Eau d'Italie, Sienne l'Hiver and Bois d'Ombrie, which according to today's Women's Wear Daily should appear in the US in January 2007.

L'Artisan Parfumeur Dzongkha is a unisex fragrance, and is available in 50 and 100 ml bottles of Eau de Toilette. The lasting power is excellent.

On a side note, Dzongkha is the first L'Artisan scent that I've purchased in the recently redesigned bottle, and I have to say that I hate the packaging. It has a rather clunky appearance that is not nearly as elegant as the old bottle. The cap looks just like a bolt head, and is nearly as heavy as the bottle itself. It looks like it was particularly designed to attract men to the brand: the kind of men who would be embarrassed by a bottle with even a modicum of femininity about it. Bah.