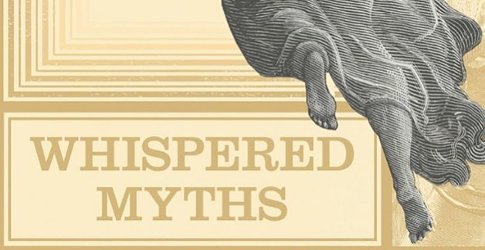 When the long hours Azzam Issa pulls at his family’s bakery begin to interfere with his day-job as a security guard at The Louvre things turn bizarre. Angelic creatures move from one painting to the next and statues speak to him in cryptic whispers...

Thus begins the description of the imaginary book that "inspired" this fragrance — a novel by imaginary author Farzan Al Essa that sounds like a captivating work of magical realism. Whispered Myths was created by Josh Meyer, the perfumer behind Imaginary Authors, with notes of oud, cantaloupe, cedar, muskdana (also known as ambrette), honey and "salvaged shipwreck."

Although that list of notes might not normally appeal to me, I was so taken by this fragrance's name, visuals and back-story that I wanted to try it regardless. I've spent most of my adult life studying art history and working in museums, and I'm perpetually fascinated by museum guards and their lives in (and beyond) museums. I've seen quite a few fragrances inspired by artists, but museum guards? Never. They're unsung heroes.

So, what olfactory story does this fragrance tell? It definitely starts off with cantaloupe in its opening "lines." Is the melon motif included as a nod to the fictional hero's Middle Eastern ancestry? Only the imaginary author (or perfumer) knows for certain. The oud, another Middle Eastern theme, appears immediately after the melon. It's smoky and earthy. I don't know whether it comes from natural oud or synthetic ingredients, but it's bold and almost too intense (for me) at first.

As the oud settles down, it turns more mellow. Whispered Myths' heart is a harmony of oud, traces of honey, and plenty of cedar. Is the cedar yet another nod to the novel's hero and his journey of self-discovery? A "quote" from the novel reads, “Lie with me. Lie to me. Saw through my center and count my rings"  — so the tree/wood analogy works well here. Imagined Myths also turns more resin-y as it develops. In this phase it reminds me quite a bit of my favorite Diptyque holiday candles, which are usually the resin-themed, blue-packaged ones from the holiday trios. I must be smelling benzoin and perhaps some myrrh.

The dry down of Whispered Myths is subtly animalic yet dry and even a bit salty. Am I getting some ambergris amongst the musky ambrette in the base? In any case, I received a compliment from a coworker at this point when I was wearing Imagined Myths at work. (Not from a member of the security staff, although that would have been perfect for its theme!)

This fragrance's projection went from above-average when I first applied it to average as it dried down, and its longevity was average. It's described as unisex, like all Imaginary Authors perfumes, but it does skews conventionally masculine in its earlier stages before it goes ,pre gender-neutral in its later heart and base.

I enjoyed "listening" to Whispered Myths as it unfolded on my skin on a few chilly days this week. If you're a fan of earthy-woody scents with surprising plot twists, try to get hold of a sample and maybe even wear it to a museum.

Additional viewing and reading: this short and sweet video interview with a Metropolitan Museum of Art security guard, made for young audiences; and this BlackBook interview with several Met guards who are artists themselves. (Full disclaimer: I'm a former employee of the Met and still give gallery tours there on a freelance basis.)