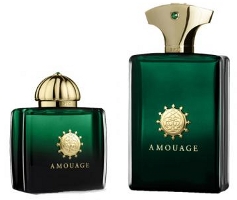 The House of Amouage reveals mysteries of the Orient and Legends of the Silk Road with the launch of its latest fragrances, Epic for Man and Woman. The spellbound Oriental fragrances artistically infuse the smoky splendour and allure of Arabia whilst maintaining the poetic depth of the Chinese culture by combining essences that would have been plied along the ancient trading routes.

In continuation with the series of narratives developed for the House of Amouage, Creative Director Christopher Chong, takes us on an evocative journey of triumphant discovery in the third instalment where beyond immortality, a legend is born.

Inspired by the operatic masterpiece, Turandot by Puccini, Chong tells the tale of Epic Woman on a quest driven by ambition and power and a guiding beacon, Epic Man, as her compass along a perilous journey along the Silk Road. She traverses the formidable and surreal landscapes only to be united with her fate of finding the long-lost aria. He explains, “The richness of both fragrances evokes the precious commodities traded across the Asian continent such as gold, pearls, tea, silks, jade, spices and frankincense, blended with a dramatic signature. Epic embraces one of the rarest and special ingredients traded since ancient times, Oud. I have juxtaposed its complex structure and ethereal essence essence with Chinese tea and Oriental flowers to complete the fusion of the two geographies’ shared trading history.”

Another update: see a review of Amouage Epic Woman.