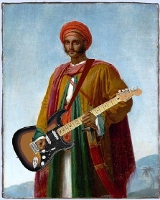 The word "oud" — when relating to perfume — always makes me think of...MONTALE. Montale has won the oud wars in the West by creating more oud-centered fragrances than any company in sight (or smell). When I heard that Le Labo was releasing an oud perfume, I thought: "Poor Le Labo — you haven't a chance!"

Le Labo launches Oud 27 this month; it's Le Labo's first global launch since 2006. (Oud 27 will not be associated with one city — you can buy it at all Le Labo boutiques.) Le Labo divulges only a few components of Oud 27: incense, cedar, patchouli, saffron, gaiac wood and oud.

Oud 27 opens with astringent oud, forceful saffron and a strange wood aroma (the scent of a newly felled tree — 'roasted' on the outside, 'raw' at its center). Right out of the bottle, Oud 27 is probably too much for most people (me not included). There is a world of difference between the odor of Oud 27 up close, nose to skin (slightly piss-y, regurgitative-medicinal, pungent) and Oud 27's sillage (sweet, incense-y, floral). As my nose moves from close-up inspection of Oud 27 to far-away admiration, I smell honey, rose, a strawflower aroma, ambergris, and the scent of leather — all blending with oud. Oud 27 dries down to a lovely and soft woody musk, and it lasts for hours and hours without ever becoming grating. (A few sprays of Oud 27 go a long way.)

My main "problem" with most Montale oud fragrances (there are a few I love and own) is the feeling, after a day of wear, that I've been man-handled, "taken advantage of," by oud. Montale oud is powerful, and it often overwhelms all other notes in a Montale oud composition — leading to a sameness in the Montale oud line of perfumes. Le Labo Oud 27 is a different sort of oud: more refined and polite, willing to share its space with other notes. Though we've just met, Le Labo Oud 27 has seduced me — gently (without leaving me black and bl'oud) and it has become one of my favorite oud fragrances to date.

For buying information see the listing for Le Labo under Perfume Houses.

Note: top right image is Study for the Portrait of a Rocker After Anne-Louis Girodet-Trioson by Mike Licht, NotionsCapital.com at flickr; some rights reserved.