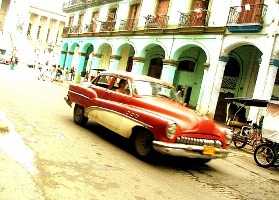 Havana Vanille is the latest fragrance to join the travel series at L'Artisan Parfumeur. It follows Bois Farine, Timbuktu, Dzongkha and Fleur de Liane — not bad company, as these things go. This time, we're off to Cuba:

From its vibrant Salsa rhythms, its famous cigars and Cuban rum, it is certain there is something magical about Havana. It is a place that contrasts all others. This mysterious fragrance is reminiscent of travels around the world, the nostalgia of crossing the seven seas to discover far off treasures and the smell of a wooden boat mingling with the aroma of rum and spice.1

The perfumer is Bertrand Duchaufour, who developed all of the L'Artisan travel series fragrances to date with the exception of Bois Farine, and the notes include rum, clove, dried fruits, narcissus, tonka bean, helichrysum, vanilla, smoked woods, moss and balsamic notes. Sound good so far? It sounded darned good to me, and lo and behold, I was not disappointed. 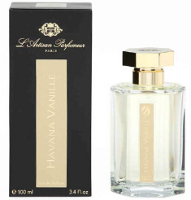 Havana Vanille starts off with spicy rum and vanilla, and lots of it: it's rich and warm, with slight undertones of something like dried apricots stewed in winter spices. It's gourmand, even chewy, but there's nothing even vaguely cake-like about it despite the heavy emphasis on the vanilla. L'Artisan describes the heart notes as "a subtle alliance of narcissus, everlasting flower and tonka bean...reminiscent of freshly picked tobacco leaves, both honey-sweet and narcotic"2, and that's spot on, but think of the smoothest, softest tobacco leaves ever: this is nothing like the heady punch of sweet pipe tobacco that you get from, say, Tom Ford Tobacco Vanille, and I don't think anyone who dislikes tobacco in perfume will find it overwhelming in Havana Vanille. The base is earthy-woody-musky, slightly resinous, slightly creamy-powdery, even more slightly smoky, and still very vanillic, although the later stages are not so rich and chewy as the opening. The far dry down is drier, more earthy-resinous and less creamy-powdery, and obsessive fans of Bertrand Duchaufour will recognize his signature after a couple hours have passed.

Havana Vanille reminds me of Guerlain's Spiritueuse Double Vanille in several respects. Despite some notes in common, they're not smell-alikes at all — Havana Vanille, for one thing, is heavier on the vanilla and lighter on the smoke — but they're both essentially vanilla comfort scents for grown-ups, and I had about the same initial reaction to the opening of Havana Vanille that I did to Spiritueuse Double Vanilla, which is that hey, I'd like to drink this stuff.

I love it. It's definitely a fall-winter scent more than a summer one, but I've been wearing it in hot, humid weather quite happily. It does best if you apply somewhat more lavishly than you normally would for an Eau de Parfum — a single spray seemed to disappear from skin in no time, but several sprays lasted a good 4-5 hours.

L'Artisan Havana Vanille launches in October, and will be available in 50 ($115) and 100 ($155) ml Eau de Parfum. For buying information, see the listing for L'Artisan Parfumeur under Perfume Houses.