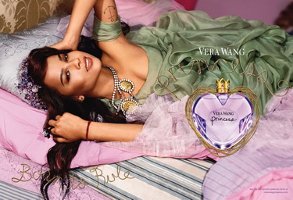 Vera Wang was a fashion editor at Vogue, then worked for Ralph Lauren before launching her own bridal boutique in 1990. While still best known for her bridal gowns, Wang has since expanded into a full-scale lifestyle brand, with evening wear, sportswear, accessories and household items.

Fragrances were introduced in 2002 with Vera Wang for women; subsequent releases include Vera Wang for men (2004) and Sheer Veil (2005).

The Vera Wang fragrance license is held by Coty.

Vera Wang Princess, a youth-oriented fragrance, launched in 2006 and quickly became a top seller for the brand.

Other recent fragrances from Vera Wang

See all articles on Now Smell This tagged Vera Wang.