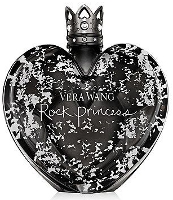 Vera Wang's little Princess has grown up — a bit:

She’d trade her tiara in for a new guitar, attend a concert instead of the prom. Introducing Rock Princess, the daring new fragrance from Vera Wang. The fragrance is a dark, fruity floral with sultry attitude and modern style. It is edgy, but seductively sweet. Vera Wang Rock Princess – the music, the spirit, the new fragrance!*

Rock Princess is the second flanker to 2006's Princess (it follows last year's Flower Princess), and as you can see from the ad copy, it's geared towards a slightly older audience, presumably one that has a later bedtime.

The juice has been tweaked to match. It's still a fruity floral, but as advertised, it's darker. The opening is still very sweet and fruity, mind you, and the heart is the requisite "fruity floral" blend of blurred flowers over vanilla cake + vanilla frosting that you've smelled in a million other perfumes, including the original Princess. In Rock Princess, it's stronger and louder, presumably enough so that it could compete in a crowded nightclub (the notes: white peach, raspberry, bergamot, heliotrope, rose, night-blooming jasmine, lily, cashmere woods, musk, iris and creamy coconut).

The "all grown up" part comes in the base, which while not quite what I'd call "dark" (much less "sultry" or "edgy"), is considerably darker than that of Princess or Flower Princess. It's woody musky, with a scrubbed-squeaky-clean patchouli, and in the later stages, has a velvety-but-not-quite-powdery finish. Rock Princess flirts with floriental status but doesn't quite go over the edge, although I should note that at least one reviewer at MakeupAlley accuses it of being a "heady oriental", so perhaps it all depends on your perspective. The coconut does not kick in until the far dry down, but even then it's subtle and adds creamy sweetness without calling to mind suntan oil.

I like Rock Princess marginally better than Princess or Flower Princess, although bear in mind that I didn't like Princess at all and I wasn't exactly enthralled with Flower Princess either. Rock Princess is an improvement, but if I was after a sweet fruity floral with a middling-dark, mostly-clean base, I'd go for Viktor & Rolf's Flowerbomb — worn together, they're remarkably similar in the later dry down, but the Vera Wang version smells comparatively flat and lifeless to me.

Vera Wang Rock Princess was developed by perfumer Calice Becker; it is available in 30, 50 and 100 ml Eau de Toilette.