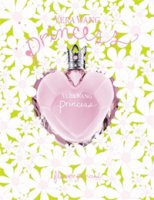 Vera Wang launched Princess in 2006 as the line's first youth-oriented scent, and as near as I can tell, it did very well indeed. Flower Princess, new this month, is Princess's first flanker, and is largely geared towards the Asian market. It reportedly "encompasses the kawaii movement of Japan — a cultural obsession with cute, adorable, spirited items"*. How it encompasses the kawaii movement isn't clear to me, as the only change to the bottle itself is in the color of the writing (they didn't even bother to add the word "Flower", so it still just says "Princess"). They did add some flowers to the outer box, perhaps that is kawaii? Or can a smell encompass the kawaii movement? At any rate, Flower Princess will be a permanent addition to the Vera Wang line in Asia; in the US and elsewhere, it is a limited edition.

The original Princess fragrance was supposedly geared towards 18-24 year olds, but based on the advertising (and the juice) I'd guess they were shooting at a much younger ('tweens and under) target. I'll add my usual disclaimer here: I'm not only way past the target age for Princess, I'm way past the target age for most any fragrance; as near as I can tell, perfume brands are not interested in women over 30. And my second disclaimer: I didn't like the original Princess, not even a little. It's probably no worse than any other sweet fruity floral geared towards 'tweens, but sweet fruity florals geared towards 'tweens aren't my thing. Victoria's review of Princess at Bois de Jasmin pretty neatly sums up my own feelings:

The composition plays by all of the rules of a girly fragrance—its sugary sweetness is comprised of fruity notes and vanilla, its sheer base is laced with musk and amber, which bear little relationship to their animalic predecessors. Princess is a cocktail of pink fruits sweetened with vanilla and topped with a dollop of frosting. Although it is probably in the sophisticated league of Barbie fragrances, like many perfumes of its type, Princess is difficult to imagine on anyone over 12.**

Now, generally what happens to flankers geared towards the Asian market is that they get pinkified: they usually end up lighter, sweeter, fruitier and girlier than the originals. In the case of Princess, which was already about as pinkified as you can get, they florified it instead. Yep, in a rare case of truth in fragrance nomenclature, they added more flowers. The opening is simply more flowers, less pink fruits. It is a little citrus-y, a little green and a little sharp, and as advertised, smells first like watery-fresh orange blossom, then like watery-fresh rose-ish blended florals (the notes: green ivy, tangerine, water lily, orange flower petals, Moroccan rose, jasmine sambac, mimosa, apricot skin, amber, precious woods and musk).

Vera Wang Flower Princess was developed by perfumer Harry Fremont, and is available in 30, 50 and 100 ml Eau de Toilette and in matching body products.

** Now don't go screaming at me because you're 52 years old and wearing Princess. I've already said I don't care what anybody wears.