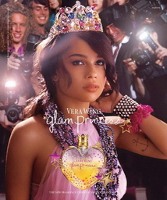 I do hope the person at Vera Wang who came up with the idea of Princess has been given a hefty raise, and maybe some extra vacation time.1 The original Princess — born to rule! — launched in 2006, and we've since seen Flower Princess, Rock Princess, and now the new(ish) Glam Princess. The first two flankers were pretty much as advertised: Flower Princess was more floral than the original, and Rock Princess was that clean fruitchouli that you usually get from a mainstream flanker with "rock" in the name.

Glam Princess is pretty close to the original Princess, close enough that it's hard to see why you'd need both. It's a fruity floral, with vibrant, tropical berry candy top notes cut with a tad of the watery apple-pear of Princess. After 15 minutes, it's awfully hard to tell the two fragrances apart; the floral notes are a generic blur, and the dark chocolate, pink frosting and chiffon vanilla in the original are not startlingly different from the vanilla orchid and marshmallow in the Glam Princess. I will say that I never really noticed the chocolate in Princess until I smelled the two together — yes, Glam Princess is less chocolate-y, but in the end they both smell mostly like pink frosting and musk. If you're after some pink frosting and musk, either one should do.

Now taking votes: what Princess would you like to see next?

1. I am fairly sure that I read recently that the Princess franchise currently makes up the largest share of the Vera Wang fragrance business, but of course now I can't find a link.