Princess Night is the fifth flanker in Vera Wang's ever popular Princess franchise. It came out last December, so I'm late, and I know all of you have been holding your breath through the winter, waiting to hear what I think of it.

All that is required from this series, I think, is that they be reasonably competent — nobody is looking for brilliance, I hope, from a flanker to Princess. And Princess Night qualifies as competent: it's sweet and fruity, as you'd expect, but in keeping with the "evening wear" theme, it has a somewhat darker and heavier gourmand base than the other fragrances in the series, with plenty of creamy vanilla. It's attractive and wearable enough, and if I were forced, in some dystopian alternative universe, to choose a Princess, I'd probably pick either this or Rock Princess. So far, that has not come to pass, and I am keeping my fingers crossed. 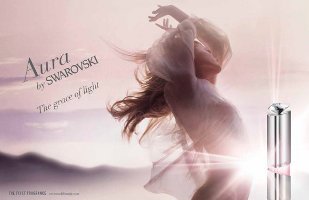 I'm even later with Aura, the debut fragrance from Swarovski, than I was with Princess Night. It also came out last year, although I don't think it officially launches in the US until later this month. I've yet to see it in a store in the US — has anyone else spotted it?

Aura is supposed to be “an incandescent fruity floral which is centered around a prism of energy”, and that's a reasonable enough description, I guess — it's a soft and airy abstract fragrance which does not smell of any particular fruit or flower. The fruits, if they are fruits, are mild, and despite the airiness, it's remarkably diffusive, almost loud. It's also very clean, and it's heavy on the pink pepper and white musk. It is pink, and it smells pink, but it's clearly geared towards an older and more sophisticated market than the Princess Night. It almost reminds me of a functional product, but it's not quite clean enough to be a dryer sheet and it's not quite fruity enough to be a shampoo. Whatever it is, it's just not my sort of thing — I was happier wearing the Princess Night.

Swarovski Aura is available in 30, 50 and 75 ml Eau de Parfum. It was developed by perfumers Olivier Cresp and Jean-Pierre Bethouart; the notes include lychee, rose, tuberose, pink pepper, amber, benzoin and white musk. 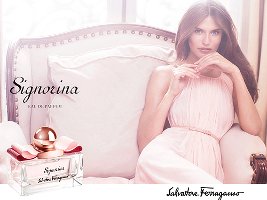 Signorina is the latest from Salvatore Ferragamo, and it's supposed to be an "olfactory celebration of chic girls" and to be "fresh, sophisticated and subtly cheeky". Victoria reviewed it at Bois de Jasmin a week or so ago, and I'm tempted to link to her review and say "what she said", because it's all true — Signorina is a cheerful and undemanding fruity thing with a slightly gourmand base. It isn't as candied as Princess Night, and it's almost certainly geared a wee bit older than that; it isn't as abstract or loud as the Aura, and it's almost certainly geared a wee bit younger than that.

Like Aura, it is pink and it smells pink, and they also share the same dollop of pink pepper. Unlike Aura, it did not bother me to wear it. It's pleasant and inoffensive, and easily qualifies for office wear. It isn't memorable, in fact, of the three under consideration today, it's easily the least memorable — I'm sure I won't recognize it next Tuesday. But it's fine, and if fine is what you're after, it's worth a shot.