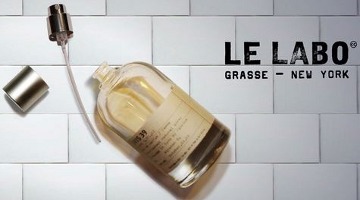 Niche perfume line established by Fabrice Penot and Eddie Roschi (both formerly of Giorgio Armani fragrances) in 2006. Le Labo started with 10 fragrances by well-known perfumers, and is known for blending the essential oils with alcohol and water at the time of purchase and providing customized labels for the bottles.

Initial releases in early 2006 were Fleur d'Oranger 27, Jasmin 17, Labdanum 18 (originally Ciste 18), Ambrette 9, Iris 39, Bergamote 22, Rose 31, Vetiver 46, Patchouli 24 and Neroli 36. In each case, the number in the fragrance name refers to the number of notes that make up the scent's composition, and the name is taken from the ingredient in the highest concentration; to take one example, Jasmin 17 has 17 ingredients, with jasmine being in the highest concentration. The names are thus not necessarily related to what the fragrance is meant to smell like.

Tubereuse 40 (2006) was the first in a series of city-exclusive fragrances; it is sold in-store in Le Labo's New York venues only (no phone or internet orders).

The city exclusives are generally made more widely available for a limited time (6 weeks) every year, otherwise, the only way to get one is in the city in question.

Le Labo fragrances are available at Luckyscent, through the brand's website or at the free-standing boutiques in Nolita (New York), Los Angeles, London or Tokyo; at Barneys in NYC, Las Vegas, Beverly Hills, Chicago, San Francisco or Dallas; at Colette in Paris; at Liberty in London. You can see a complete list of boutiques and counters on the brand website.

See all articles on Now Smell This tagged Le Labo.