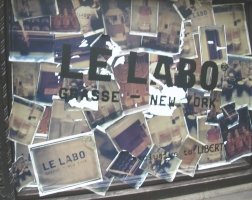 The new Le Labo area at Liberty opened on October 11th, just outside the main perfume room. As yet, they are not offering Discovery sets or travel sizes, just the base collection of ten scents and the room fragrances and candles. They also stock the Olfactionary (a "dictionary" with 40 natural perfume essences "to refine and develop your sense of smell"), for £295.

The arrangement, just as in their New York boutique, is that the scents are made up for you while you wait. And, just as in New York, there are white tiles and lab coats, and a generally scientific feel about the whole enterprise. There was clearly a lot of interest and excitement from customers when I visited — both from men and women. 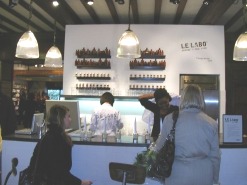 Behind the counter, the two friendliest and most enthusiastic assistants I’ve ever met across a perfume display explained the concept to newcomers and made up perfumes with flair and precision. Flavia and Suzi are both clearly delighted to be promoting perfume on the basis of how it smells, rather than on celebrity endorsement. “I was tired of selling perfume when I didn’t know who’d created it, or what was really in it,” says Flavia, who worked for Yves Saint Laurent for years. “When the idea behind le Labo was explained, I felt so excited. This was exactly what I wanted to do!”

A new ‘London-only’ fragance is expected early in 2008, but it hasn’t yet been composed.