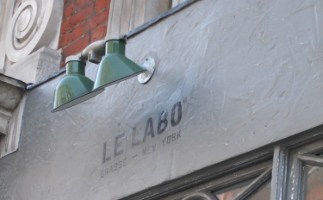 Le Labo opened their first London standalone shop very quietly, in late February 2010. They were already in London, of course, via their counter in Liberty — about as prestigious as it gets in the central London department store arena. Now they’ve chosen an equally upmarket neighbourhood for their first London shop.

Devonshire Street links Harley Street with Marylebone High Street (it’s pronounced ‘Marly-bun’, in case you wondered). This is an area of Georgian terraces and charming little mews, as well as being the epicentre of private medicine in the UK. Marylebone High Street is one of those chic, understated shopping areas where the charity shop sells Prada and you’re likely to vaguely recognize the person on the next table if you pop in for a lunchtime bite. (A friend of mine trailed after a familiar figure one day; it was Ronnie Wood.)

The Le Labo shop is actually just round the corner from Marylebone High Street, at 28a Devonshire Street. The numbering is odd; 28 Devonshire Street is across the road, which is eccentric even by London standards. Le Labo is slotted in next to a small art shop. 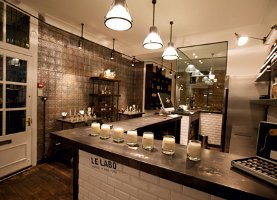 The interior of the shop is artfully dilapidated, with rough brown floorboards and pre-scuffed zinc worktops. Items are displayed in metal trolleys that look strangely industrial. You can lounge in an antique leather armchair with a coat of arms painted on the back, and admire the details of an old cast-iron fireplace. The walls are lined with antiqued metal tiles. The usual Le Labo laboratory area is present, although assistants Gabriele and Alessandro explained that the white lab coats have been replaced with brown aprons, like those worn by carpenters.

The shop sells the London exclusive, Poivre 23. I also noticed a clothes-washing liquid scented with Rose 31, produced in association with a company called The Laundress.

Best seller: Rose 31. “Everything is unisex, including the Rose.”

Nearest tube: toss-up between Baker Street and Regents Park — choose whichever is the fewest stops from where you are.

Nearby: Langan’s Brasserie is just opposite. The Conran Shop is a few minutes’ away at the north end of Marylebone High Street.

You’re also minutes away from Madame Tussaud’s. But, despite all the attempts to persuade you otherwise by shops and businesses, ‘221b Baker Street’, the address where Sherlock Holmes was supposed to live, never actually existed!