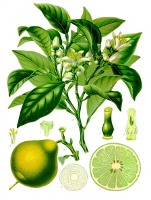 Bergamote 22 starts with a rush of dry spices not unlike the opening of Rose 31, but with lighter notes of citrus and orange blossom replacing the rose and deep woods in the Rose 31. I would swear there was a touch of cumin here too, and pepper as well, but neither are listed in the notes and I already established yesterday that I cannot necessarily identify spice notes correctly (and my spice cabinet is no help: I gave up cooking years ago and everything there has long since turned to odorless dust). At any rate, it is spicy, and there is a pale woody-musky base with just a touch of earthiness.

It is more dry than sweet, and rather like a cross between The Different Company's Divine Bergamot and the early stages of Eau Pour Le Jeune Homme by Maître Parfumeur et Gantier. It has a summery character, but I wouldn't go so far as to call it transparent, and certainly it has more presence than the Divine Bergamote. I am wearing all three fragrances right now, and the Le Labo is giving the other two a run for their money: I might just need to own all of them. I would call it comfortably unisex — it is easily less masculine than Rose 31 — but Le Labo is marketing it as a men's fragrance.