In Angela's recent article on Becoming a perfumista, she identified four stages along the road from newbie status to curating a personal collection of 300+ perfumes: strong interest, beginning perfume mania, full-blown perfume mania and connoisseurship. I'd like to add a fifth: rampant cynicism. This comes, I think, of already owning enough perfume to scent a small town for the foreseeable future, and then not only looking for more fragrances that you might conceivably love and want to own, but also trying (in vain) to keep track of all the new perfume releases and to smell as many of them as you can possibly manage.

You can tell you've reached stage five when almost everything you read about a new fragrance makes you either laugh out loud or roll your eyes, depending on your mood. I must have been "in a mood" the day I first read about the new Gucci by Gucci, because I remember rolling my eyes. Gucci's Creative Director Frida Giannini was said to have "unleashed her affinity for masculine notes" — yeah, right. I've heard that nonsense before. And "modern chypre" gets an eye roll from me no matter what mood I'm in. The commercial didn't help — I'm a David Lynch fan, but his spot for Gucci by Gucci struck me as silly.

So, Gucci by Gucci and I did not start off on the right foot, and matters did not improve when I tried the actual juice. I normally avoid applying fragrance in-store, but I was on my way out of the mall anyway so figured, why not? I gave two good sprays to my right hand, and nearly passed out. This stuff is STRONG. And FRUITY. And top-loaded with PATCHOULI. But by the time I got on the highway to head home, things had improved drastically. Gucci by Gucci starts loud, but it calms nicely. Subsequent tries with a (non-spray) sample vial have been even better.

Gucci by Gucci was developed by perfumer Ilias Ermenidis, and the notes include guava, raspberry, pear, chamomile, Tahitian Tiare flower, orange blossom, spider lily, patchouli, honey and musk. The patchouli and fruit, as mentioned above, are strong in the opening, but it isn't really overly sweet or fruity if you don't overapply (this is one scent I'd prefer to have in a splash rather than spray bottle). In fact, it wears more like a musky skin scent with woody and earthy undertones — unlike many so-called modern chypres, this one feels like a chypre. The honeyed floral notes aren't exactly sheer, but they're tempered by the drier base notes. It isn't too masculine for a woman to wear, but still, Giannini wasn't kidding: I should think a man could get away with Gucci by Gucci without a problem. If you're a man and you've tried it, do comment and tell me if I'm crazy.

The dry down is smooth and dry, and reminiscent of a very soft suede; the tiniest little lingering touch of fruit adds some fullness. It is quietly sexy, with an ambery-spicy warmth that is perfect for fall. Nicely done. 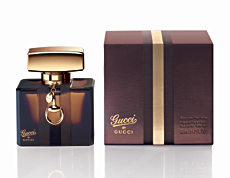 I don't love the bottle personally, but it is attractive, and it looks appropriately Gucci-ish. The lasting power is good. Gucci by Gucci is available in 50 ($80) and 75 ml ($100) Eau de Parfum and in matching Shower Gel & Body Lotion. It is currently exclusive to Neiman Marcus, Saks, and Gucci boutiques; it will go into wider distribution in early 2008, at which time a "luxury, more concentrated edition" is also expected to launch (via Women's Wear Daily, 7/13/2007)