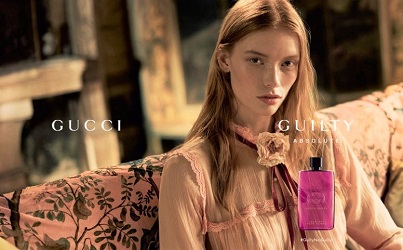 Born out of a special collaboration between creative director Alessandro Michele and master perfumer Alberto Morillas, Gucci Guilty Absolute Pour Femme is created using a particular blend with a structure that remains unchanged from the first time it is applied to the skin. Goldenwood is complemented with a mysterious note of blackberry, creating a non-traditional chypre fruity fragrance for a contemporary woman. The fragrance’s composition is intensified with patchouli oils and Bulgarian rose."

Michele said he wanted a "...blackberry note that would make you dream upon smelling it. It’s magical and it’s connected to nature, as well as to emotion. There is romance in this perfume, an aura of pure, free love."

Why this sudden (Gucci) emphasis on a perfume that does not change from start to finish? Is this beginner's perfume? (No surprises here!) A perfumer's exercise: it is what it is what it is.... A nod to the new simplicity in fragrance? The linear idea (sort of) worked in the bolder, unique Guilty Absolute Pour Homme, but how does it fare in Guilty Absolute Pour Femme (other question: do we even care?)

Guilty Absolute Pour Femme begins with a juicy blackberry(ish) note mixing with a hint of cypress and rosewater; the blackberry smells a bit "tropical," like a Life Savers berry candy tastes. Given blackberry's fugitive, mysterious aroma and its flavor profile, this may be unavoidable. Gucci's blackberry possesses no sparkle; it's as warm and subdued as the faded pink/beige-y Gucci advertising image above. On my skin, Guilty Absolute Pour Femme's fruity-floral first act plays out quickly, just before the perfume commences its development again (yes, it changes character). A hazy quality evolves about 10 minutes into Guilty Absolute Pour Femme: to the muted blackberry note, a bit powdery now, comes the lightest (synthetic-smelling) woods imaginable, some mild muskiness and a drop or two of sheer patchouli. The extreme dry down adds a cool, almost minty, vanilla note to the faded berry and it makes me think of  "white chocolate" fudge swirled with some "berry stuff." 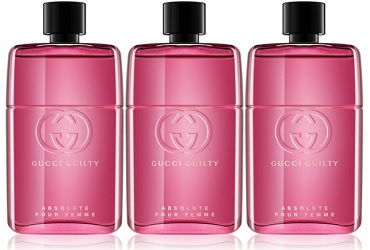 Though I have zero interest in wearing Guilty Absolute Pour Femme (or ever smelling it again), I think it could be great for young girls who want something "Gucci."

Lots of people "out there" in Perfume Land seem to love this; do give Guilty Absolute Pour Femme a shout-out in the comments if you like it.