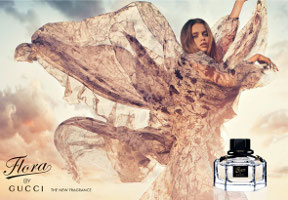 Flora is lighter, the floral scent of course evokes a younger consumer, and she has a hedonistic, daring side. I don’t want to say that Flora is the daughter of Gucci by Gucci but maybe the younger sister.*

That's Frida Giannini, Gucci's creative director, explaining how Gucci's new Flora fragrance fits into the larger scheme of things. I'm guessing she didn't want to call Flora the daughter of Gucci by Gucci because she didn't want to position Gucci by Gucci as so very old as all that, but in fact the two are light years apart — as near as I can tell, the "woods for women" / "masculine notes for women" (or whatever you want to call it) trend that Gucci by Gucci rode in on is over almost before we had time to adjust to it. Flora smells very of-the-moment: it's light, clean, fresh and pretty, which I hope is what perfume consumers were after this spring because there's plenty of it on the counters at the moment.

The notes for Flora are listed as citrus, peony, rose, osmanthus, pink pepper, sandalwood and patchouli, but they don't matter too much: this is a sheer, almost-sparkling floral, very pale and clean, in which nothing stands out other than the peony, and even that only for a short while. It smells like it's been through a rigorous series of focus groups designed to ensure that it would not ruffle feathers on anybody anywhere: there's nothing sharp in the citrus-y opening, it's floral but not too floral (don't let the rose and osmanthus scare you, they're mostly MIA), it's vaguely peach-y but not too fruity, it's sweet-ish but not too sweet. The "sandalwood" and "patchouli" in the base need not worry anybody who doesn't like sandalwood or patchouli: the base is a fairly bland woody musk. The consumer who loves Flora might well have a hedonistic, daring side, but she apparently prefers to not to express it through her fragrance.

It has an ageless quality: it's obviously geared towards someone young — mid-20s, perhaps? — but it would not feel out of place on a 5 year old or a 95 year old. If I had to explain how Gucci Flora fits into the larger scheme of things, I'd call it the still-cheerful older sister of Marc Jacobs Daisy. It's massively pleasant, the bottle is nice, and the commercial is wonderful — I should think that's enough, right? As March said at Perfume Posse, you could do worse.

Gucci Flora is available in 30, 50 and 100 ml Eau de Toilette, and can be found most anywhere.