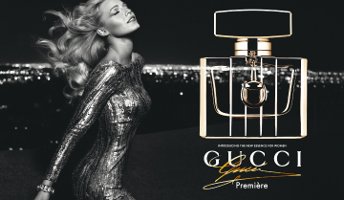 Gucci, as a brand, doesn't really appeal to me; so far as I can remember, I've never owned a single Gucci item other than decants of the original (not version II) Gucci Pour Homme. Gucci's popular fragrances of the late 1990s, Envy and Rush, both passed me by entirely — I did not smell either until after 2005. Gucci by Gucci (2007) and Gucci Flora (2009) were both just fine but did not go on my buy list; Gucci Guilty (2010) I liked a little less, although I'll go for Jessica's characterization of Guilty as "modern" and "wearable".

And where does the newly launched Gucci Première fit into the mix? According to Procter & Gamble, the holders of the Gucci fragrance license,

We have three big pillars that we want to support and make as long-lasting classics in the market,” added Luigi Feola, vice president of Procter & Gamble Prestige, referring to Flora, Guilty and Gucci by Gucci. “Première will be the female counterpart to the male Gucci by Gucci,” he explained, noting that the original women’s Gucci by Gucci — Giannini’s first fragrance for the Italian fashion house, which some considered quite masculine — has become more of a niche perfume.1

So, Première, presumably, is meant to sell in a way that Gucci by Gucci did not, in which case I hope that many consumers found the Blake Lively commercial considerably more captivating than I did — what's with all the fragrance commercials featuring women in couture staring longingly out of windows, anyway? Or perhaps many women will be impressed by the "Hollywood glamour and the iconic women of Hollywood’s golden era” backstory,2 which strikes me as dime-a-dozen at this point.

Or perhaps the bottle will sell the juice? In keeping with the "replace Gucci by Gucci" idea, perhaps, it's the same basic design as that one, but done in a shiny gold finish. It's not quite so opaque that you can't see the liquid inside, still, watch out for fingerprints.

Gucci Première opens on an enormous fruity musk — it smells like a berry punch shampoo or body spray, and it's rather more exuberant about it than it ought to be. On paper, that stage lasts for a good long time, but on skin, it's relatively short-lived. The heart is blended floral notes, the base is a clean fruity-woody musk with a touch of dry leather. Imagine what you think of as "leather" in perfume, now take that one step smoother and two steps cleaner: that's the leather in Gucci Première. In other words, it has something like the idea of leather without being in any way animalic or dirty. The longer it's on skin, the darker and drier it gets; after an hour, it's something a man could easily get away with, still, it's not so overtly "masculine" as Gucci by Gucci. The whole thing, once the top notes fade, is rather subdued, not close to the skin exactly, but certainly much quieter than the opening.

Première is clearly going for a slightly older, more sophisticated market than that for Flora or Guilty — the women who would have bought Gucci by Gucci had Frida Giannini not “unleashed her affinity for masculine notes” with quite so much abandon. I'll be interested to see if it hits its mark. For my tastes, the dry down is nicely done and a reasonably good fit with the bottle and the concept,3 but it's not memorable or interesting enough to make my buy list, and the opening seems made for another woman entirely. That's not all that unusual in the prestige fragrance market, where a "fun" opening on a paper blotter helps move things along at the fragrance counter, but I wonder if in this case it's rather too much fun for their purposes? We'll see. If you've tried it, do comment! 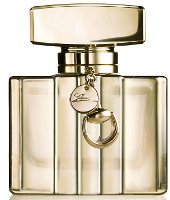 Gucci Première is a floral woody musk; the notes include bergamot, orange blossom, white flowers, musk, leather and wood. It is available in 30, 50 ($87) and 75 ($105) ml Eau de Parfum and in matching body products.

2. Ibid. Gucci Première is named for the brand's Première Collection line of couture gowns that debuted in 2010.

3. It's not what I'd put on with a couture gown, even if I was just going to hang around by myself staring out the window, but quite a few women reviewing it online mention its sophistication.