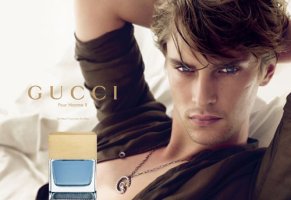 Like Gucci Pour Homme (2003), the newly released Gucci Pour Homme II (created by perfumer Karine Dubreuil) is a subtle fragrance. I saw Pour Homme II’s packaging long before I knew anything about the scent and I worried that the cologne’s blue tint was a reference to sea and sky, to ‘water’ and ‘air’ accords that are so over-used these days in men’s fragrances. Before smelling the fragrance, I read the list of Pour Homme II’s ingredients (bergamot, violet leaves, cinnamon, pimento, black tea, myrrh, tobacco leaves, white musk, and olive wood) and though no marine or ozone notes were mentioned, I was still “concerned” because the recipe for a bland men’s department store-designer fragrance was there in its structure: Top: bergamot, Middle: cinnamon-pimento, Base: musk/wood.

Gucci Pour Homme II opens with refreshing violet leaf and bergamot notes — if the scent stopped there and maintained its fruity-green opening, I would be satisfied. But Pour Homme II’s opening is fleeting; in fact, a few moments after application one feels the entire cologne has disappeared along with the top notes! After the surprising fade-out, cinnamon and pimento kick in and these notes, not foody at all, take over. This combo of cinnamon and pimento “tweaks” the nostrils and seems very popular in men’s fragrances these days — and I can’t say I’m a fan. (I recently encountered the identical smell in H2 by Hummer.)

During the final stage of Pour Homme II’s development (the stage I like best), one smells light musk, tea, and the pleasing aroma of cured tobacco leaves (but one must put nose to skin to discern these pleasant notes). If the violet leaf, tobacco and tea notes had been amplified and the annoying cinnamon-pimento deleted, Pour Homme II would have been a more interesting scent. (Yes, I just redesigned Pour Homme II to my own tastes.) However, the hesitant and safe, overly smooth and tame nature of Pour Homme II places it comfortably on the mainstream, and market researched, cologne counter (though its ingredients seem of a higher quality than those used in most popular men’s designer fragrances).

Gucci Pour Homme II is a light cologne, so it would be good for hot weather use and for those who want only a soap-like hint of scent on their skin. It has recently been released in department stores in 50 and 100 ml Eau de Toilette, but has yet to hit the discounters.