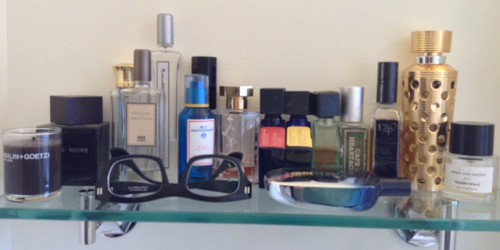 When Meredith and David met in graduate school, they both liked scent but weren't fiends for it: Meredith wore mostly Chanel Coco, and David stuck to essential oils. It wasn’t until they moved in together that they really began exploring perfume. Over the fifteen years or so since, Meredith and David have built a modest but thoughtful collection of shared and separate fragrances.

First, a little background. Meredith, an artist, grew up in Anaconda, Montana, in a rambling Victorian house. Her family wasn’t big on perfume, although she remembers her mother occasionally wearing something that smelled like lilies of the valley. When Meredith was a teenager, she bought a bottle of Coco, which became the foundation of the few bottles of perfume she kept on hand and set the stage for her love of orientals. As she was finding her perfume legs, she wore Jessica McClintock and Issey Miyake Eau d’Issey, too.

David, also an artist and management at a big Portland design firm, grew up in New Haven, Connecticut, in a fragrance-loving Italian-American family. His mother loyally wore Lanvin Arpège, until she jumped ship for Estée Lauder Beautiful sometime in the 1990s. David’s first fragrance was Old Spice, then, in middle school, Canoe. In high school he moved on to Ralph Lauren Polo and Guy Laroche Drakkar Noir before going hippie with amber, sandalwood and frankincense essential oils in college. 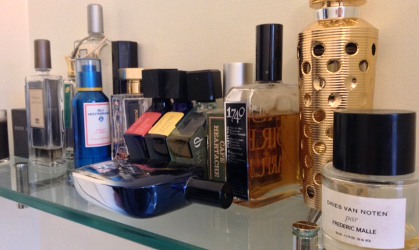 Once they were dating, David gave Meredith a bottle of Gucci Envy — he wore the masculine version — and sometime later, Meredith bought Prada Eau de Parfum, “a pivot back to orientals.” Then, together they discovered L’Artisan Parfumeur. Méchant Loup, Premier Figuier, and Passage d’Enfer formed the nucleus of their shared collection. They learned that they both wear incense well and added a few of the Comme des Garçons incenses, which was a natural segue to Tauer Perfumes. (David gave Meredith bottles of Tauer Perfume Incense Rose and Phi — Une Rose de Kandahar in an attempt to head off her hankering for a more powdery rose.) Other fragrances they share include Imaginary Authors Cape Heartache, Histoires de Parfum 1740 and Carthusia Numero Uno.

They can’t share all perfume, though. David’s skin burns straight through top notes and sours some florals. He does well with intense vetiver (Le Labo Vetiver 46 and Lalique Encre Noir are favorites) and the woods and incense of Comme des Garçons (CdG 2 Man and Hinoki, especially).

They keep their main rotation of perfumes on a glass shelf in the bathroom. In the linen closet is a plastic shoebox jumbled with empty bottles (“to remind us which ones to get”) and bottles that don’t get used as often. 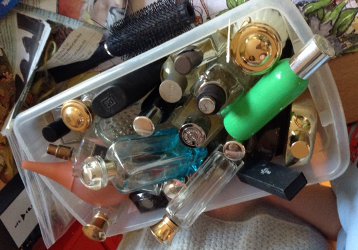 Where they haven’t seen completely eye-to-eye is on household fragrance. “David wants the house to smell like an old fire in a dirty sock,” Meredith says. David counters that Meredith would transform their house into grandma’s place with roses, lilacs and powder. They both like lavender and incense, though. And they’ve given serious thought to their ultimate perfume: it would smell of “hot sand, pine, funky ocean, and fresh, sweet seagrass.”

The perfume gene lives on. David and Meredith’s seven-year-old son frequently accompanies them to perfume boutiques, occasionally wearing his signature cape. A few years ago, he announced his dream perfume as “flowers — and peanut butter.”