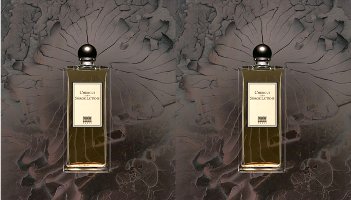 Dallying with Tom Ford Private Blend Tobacco Oud sent me looking for my sample of Serge Lutens Chergui. It had probably been a couple of years since I’d smelled it. When it took more than a minute to find the tiny vial in a shoebox of samples, I wondered why I was going to all the trouble. Chergui is tobacco and hay. A nice spicy oriental. I know what this one is all about, right? Wrong.

As I’ve been discovering lately with other fragrances I’ve haven’t smelled in a while, Chergui is not exactly what I remembered. Maybe it’s because I’ve sampled so many perfumes between now and the last time I sniffed Chergui and so have a larger frame of reference. Or maybe my taste is changing. But today Chergui to me smells much more complete and complex than I’d remembered.

Chergui (pronounced “share-ghee” with a hard “g”)1 Eau de Parfum was released in 2005 and was developed by perfumer Christopher Sheldrake. Its notes include honey, musk, incense, tobacco leaf, hay, amber, iris, rose and sandalwood. Its liquid is mink brown.

Yes, Chergui smells like hay and dry tobacco, but with a classical structure kicked off by the tart citrus top notes and maybe the whiff of lavender of a gentleman’s cologne. In a flash, they vanish into Chergui’s main story. Unlike Serge Lutens Fumerie Turque, which is all about the humidor, Chergui’s heart is cooled and lightened with flowers — iris stands out the most to me, although it's subtle — and sweetened just a touch. It’s cooler and drier than I remembered. Also, I didn’t remember Chergui’s musk, but it’s definitely present as a clean, refreshing thread woven through the fragrance’s thick, dry body. After fifteen minutes, though, what stands out most is dried, unsmoked tobacco leaf (the plant and not the processed cigarette or pipe tobacco) and sweet hay.

As Chergui settles over its six or eight hour quiet life on my skin, the tobacco eventually burns away, and soft sandalwood and spicy amber — the stamp of an oriental fragrance — eases Chergui to its last breath.

Lots of perfume writers have pointed to Morocco in their Chergui reviews. To me, Chergui smells dreamy and vaguely Victorian. Smelling Chergui and closing my eyes, I see hand-drawn Rube Goldberg contraptions and smoky gentlemen’s clubs. It hews masculine. I think Fran Lebowitz would adore Chergui, and Oscar Wilde might have sprayed it around his library, although I think he would have chosen something violet-based for personal wear (Etat Libre d’Orange could set him up nicely, I bet). Steampunk fragrance aficionados must have Chergui in their collections.

Have you ever been surprised by a fragrance you thought you knew and put away, then smelled months or years later? I’ve been loving getting to know the neglected corners of my perfume cupboard.

Serge Lutens Chergui Eau de Parfum is part of the export line and costs $130 for 50 ml. (Or you can drop $290 for the 75 ml bell jar.) For information on where to buy it, see Serge Lutens under Perfume Houses.

1. If you ever find yourself stumped by how to pronounce perfume names, visit the blog Frag Name of the Day. Bela has recorded the pronunciations of more than 1,000 perfume and perfume-related words. My dream is to someday string them all into one giant recording so I can listen to Bela’s charming voice and all those fabulous words as I fall asleep.