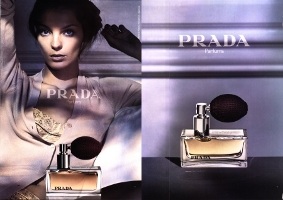 Prada Eau de Parfum was meant as a...

...modern take on essential oils, said the company. It is an amber scent built around four time-honoured essences, each meant to reflect one of four dimensions: sandalwood oil from India is pure; patchouli leaves from indonesia are addictive; labdanum resin from France is precious: benzoin from Siam is profound. (via Cosmetics International, 6/1/2004)

Prada Eau de Parfum is all about amber; other notes come and go, but the amber is prominent from the first spray. Citrus decorates the top notes, a whisper of florals the middle, and a dry, earthy patchouli with vanilla accents the base, but the amber is the star here. It is, as advertised, a modern sort of amber; it is warm but not rich or heavy, and smells nothing like its hard-hitting oriental forebears.

I call it modern, but others do not: a quick perusal of the reviews at MakeupAlley reveals a surprising number of "old lady fragrance" complaints about Prada Eau de Parfum, and it is true that Prada did not bow to the current convention which says that if you want to attract the massive youth market, you have to include lots of sugared fruit. Comparisons also abound, mostly to Thierry Mugler Angel and Chanel Coco Mademoiselle, but Prada is a considerably more restrained fragrance than either. Whether that is a good or bad thing, of course, depends on your preferences. As I don't adore amber, it strikes me as a good thing. Amber lovers, do comment!

Prada Eau de Parfum Intense followed in 2005. The notes given are identical, but Prada Intense is not merely a more concentrated version of the original scent. The patchouli is considerably more in evidence, giving the Intense an earthier edge, and it is marginally sweeter and warmer. It also smells fruitier to me — there is something almost plummy about the mid notes — and it is longer lasting, although it still isn't quite a powerhouse in terms of longevity.

The relationship to Angel is more marked in the Intense, but to my nose they are still distant cousins at best. The Intense retains a feeling of restraint, and while it is sweeter and fruitier than the original, it is still a relatively dry fragrance. Surprisingly, given that I don't like patchouli much more than I like amber, I prefer the Intense. It seems sultrier and sexier, and simply makes more of a statement.

Neither of the Prada fragrances smell strikingly unconventional or original, but then, neither do they smell (as so many of their designer fragrance compatriots do) blatantly commercial. The packaging is a perfect match: it is elegant but not showy, and has a "targeted to grown-ups" aesthetic that is a welcome change. Ditto on the advertising.

Tomorrow: Prada Eau Tendre, with Prada Amber Pour Homme to follow over the weekend or early next week.