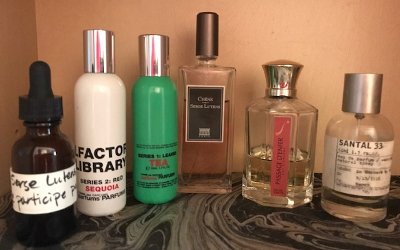 “My whole life, I’ve hated the smell of flowers in perfume,” Nancy says. Nancy, a vibrant 60-ish artist specializing in fine jewelry, is tall and striking and favors chic black tunics and bold glasses. Comme des Garçons would do well to hire her for an ad campaign.

She grew up in Kalamazoo, Michigan, where her mother wore Chanel No. 5. I ask her if that’s why she doesn’t like floral scents. “Maybe,” she says. Her grandmother smelled of Camay soap and powder. Nancy went in a completely different direction, reaching for masculine fragrances as early as high school. In her teens, she worked at a head shop, discovered patchouli oil, and added that to her repertoire. (To this day, no matter what high-end fragrance she wears these days, somewhere on her body is a drop of patchouli oil.) 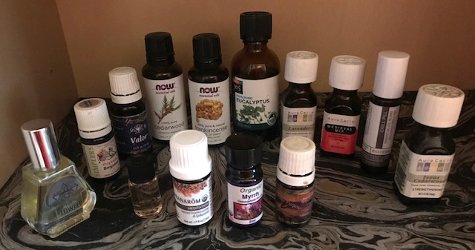 After college, Nancy moved to Chicago. For a few years, she and her boyfriend shared a fragrance they bought in the men’s section. (Nancy can’t remember the name of it.) She says the boyfriend, despite being trouble, had a particularly alluring personal aroma. “He was French, with curly black hair,” she says. “Short, but not short everywhere, if you get my drift.”

Andrée Putman Préparation Parfumée is the fragrance Nancy identifies with most closely. She discovered it while shopping with a friend at Barney’s. She quickly passed by the gardenia-heavy Marc Jacobs for Women and honed in on Andrée Putman’s woody scent. “You don’t think it’s too hamster cage?” she asked her friend. They agreed it was perfect on her. Then, she smelled something delicious he’d sampled on his skin and asked what it was. The Marc Jacobs.

Nancy wore Préparation Parfumée for a decade until the fragrance was discontinued. She hoarded bottles, and the moment she learned it was back in production, she got someone to cover her at work for a few minutes so she could order the largest bottle by telephone. 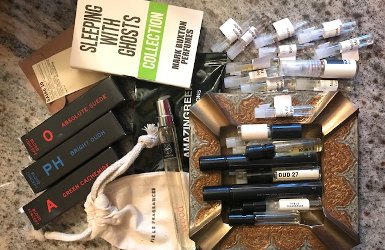 These days, she still loves Préparation Parfumée, but she’s also worn Le Labo Santal 33, dabbled in Comme des Garçons Series 1: Leaves, Tea, their incense series (she waxes nostalgic about Avignon), and some of the house's wood-centered fragrances including Hinoki. She’d love a bottle of Le Labo Guaiac 10 if her budget permitted. She continues to keep her distance from anything wafting too much of the garden, and she doesn’t like the smell of cinnamon, either.

Nancy owns a handful of bottles of perfume, but most of her collection these days is in decants and samples. She balked at taking photos of her collection, saying they are in a dark, boring cabinet. I assured her that’s how most of us store our perfume. Look closely, and you’ll see the bottle of patchouli oil. 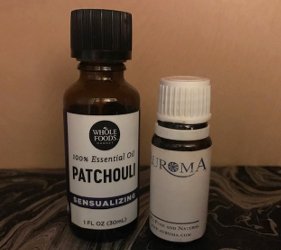