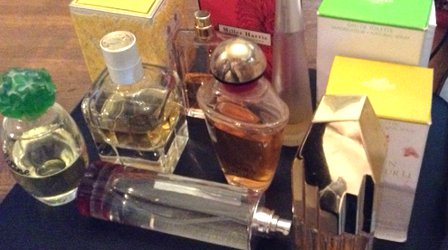 Earlier this week, as Geri recovered from a hip replacement operation, walker at hand, she told me the story of her journey with perfume. We sat in her dining room. A vase held tight white roses with frilly pink edges that opened to blooms as big as a baby’s head. Behind us was a grand piano and a harpsichord. (Geri is an organist with gigs at churches and funeral parlors throughout town, and she occasionally hosts baroque musical ensembles at her house.)

She told me that the first fragrance she knew well was her mother’s Yardley Lavender. “It was the only perfume my dad liked,” she said. Her father didn’t wear fragrance, although he shaved with a mug of soap, and every once in a while he’d clean the family’s eyeglasses with his shaving brush.

Besides her mother’s lavender, Geri’s early awareness of fragrance include her church’s incense and beeswax candles. Portland’s long-defunct department store, Lipmann’s, wafted a sophisticated fragrance Geri couldn't identify but that still intrigues her. Also, one Christmas she toured department store windows in New York City decked out for the holidays. Portland's old Zell’s Jewelry had beautiful holiday displays, too, and she came to associate the Zell’s manager’s Issey Miyake Eau d’Issey with the window displays she saw. Eau d’Issey has spelled sophistication to her ever since.

Travel has also played a strong role in stoking Geri’s interest in scent. “When I was in my mid-twenties, I was on a plane, and the stewardess wore an enchanting perfume.” Geri lifted her bottle of Givenchy Ysatis to compare to the flight attendant’s floral scent. That and the chic way the flight attendant wore her scarf has stayed with Geri.

Later, a friend asked her to buy a bottle of Guerlain Samsara in the duty-free shop in Iceland, and Geri came home with a bottle, too. In later years, European airports yielded bottles of Hermès Le Jardin de Monsieur Li and Un Jardin sur le Toit. (These last two are the fragrances she reaches for most days when she’s working and wants to be fresh for a service but not be intrusive or cloying.)

Geri's fragrance journey continued at home. A friend took her to Portland’s The Perfume House, and each of them came home with a bottle of Rancé Josephine.1 Not long after, another friend told her about the Bois de Jasmin blog, and Geri became an ardent reader. She loves Victoria’s stories of her Ukrainian grandmother, which remind her of her own no-nonsense Saskatchewan grandma. 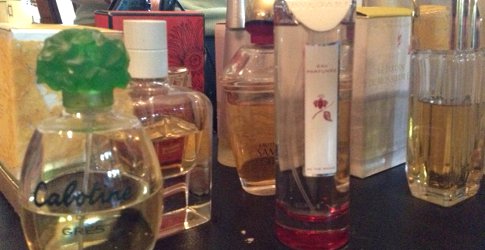 Bois de Jasmin's articles, along with the discovery of internet perfume discounters, led to occasional purchases of fragrance, from Guerlain Mon Guerlain and Hermès Jour d’Hermès to an enviable bottle of Penhaligon’s Ostara. Geri keeps between twenty and twenty-five bottles of fragrance in a white melamine cabinet in her bathroom. They neatly fill a shelf.

“You didn’t ask me about soap,” Geri said. She loves freshly opened soap and fondly remembers the fat white bar of a Crabtree & Evelyn soap in a friend’s bathroom in San Francisco that sparked her efforts to hit the summer sales for luxurious bars of soap to offer as Christmas gifts to cantors and other associates.

As for notes, Geri was clear that she wasn’t wild about tobacco, and she doesn’t like fragrances that are too sweet. Otherwise, her perfume collection is a mix of floral, tart, heavy, and green without much in the way of leather, cologne, or old chypres. From looking at her bottles, I couldn’t figure out where Geri’s perfume tastes really lay. She doesn’t have a particular fragrance she’s on the lookout for, and she can’t tell you what her ideal perfume would be. She said she’s not great at defining notes.

Then I understood. Geri loves the discovery of fragrance. She loves learning and experimenting. To her, perfume is an adventure, and she cherishes the ride. Not everyone who loves perfume has to be able to recite each perfume house's major perfumers and critique releases of Mitsouko by year. Maybe enjoying exploring scent is more important than knowing the difference between Indian and Australian sandalwood by smell.

Geri pointed out that some old associations linger. Now, as she recovers from her operation, she finds a light dusting of Taylor of London lavender bath powder a comfort as she goes to bed. Mom would approve.

1. A few of you out there are no doubt rolling your eyes with affection. The Perfume House’s owner loved fragrance and storytelling with equal passion. Sometimes that passion overcame strict veracity, and hundreds of visitors heard his story of Rancé’s lucky discovery of vats of perfume made for Napoléon and Josephine, which the company released for sale. The fragrances, he said, were designed to marry each other for a grander scent when two people wore them then mingled their perfume. Thanks to The Perfume House’s owner, every other dressing table in Portland’s tonier neighborhood holds a bottle of Rancé Josephine.