I’m a lucky person; I live with a man (“B”) who cannot be intimidated and who is hard to embarrass. I hope everyone reading this post has such a person in their lives — they come in handy! If I were living alone and developed a case of, say, jock itch (sorry if anyone finds this offensive but I need to make a strong point here), I would never in a million years go to the drugstore, even disguised in a wig, hat, faux moustache, scarf and sunglasses, and buy a remedy; I would order a treatment online and suffer till it arrived in the mail. Thankfully, if I ever do develop such a nasty malady, I have B and I’d say to him: “Would you mind buying me a box of Gobi Desert Jock Itch Powder?” B would go to the drugstore immediately. If he walked into that drugstore and saw that the only employee was an 18-year-old Adonis dressed in Prada from head to foot, B would smile and say to him: “Hi, where can I find the Gobi Desert Jock Itch Powder?”

Robin here at Now Smell This has been asking me to review Old Spice for over a year, and I’ve procrastinated because I was too embarrassed to buy a bottle of Old Spice; sad, but true. Last Saturday, as we ate dinner, I said to B: “You know, Robin wants me to review Old Spice. But how will I get a bottle of that — stuff?” As I had hoped, B exclaimed: “What a great idea! I’ll buy you a bottle.” Then he said: “You know, Old Spice is the men’s Chanel No. 5!” I laughed heartily at that statement but then, a few days later, I read an article in Forbes by Lauren Sherman (Best-Selling Celebrity Scents, Oct. 9, 2007) and one of the sentences read: “In a crowded market place, it's more difficult for beauty companies to establish the next Chanel No. 5 or Old Spice.” I felt these two “pairings” of Old Spice and Chanel No. 5, one spoken, one written, within the space of three days were a SIGN to write my review and even explore a Chanel No. 5-Old Spice connection.

Chanel No. 5 (1921) and Old Spice (1937) are well-established brands; they are popular and sell well, are distributed worldwide and have great name recognition. Everyone seems to know someone who wore or wears the fragrances. Name me a men’s fragrance that is as iconic, enduring, legendary, and powerful in the marketplace as Chanel No. 5? I think Old Spice qualifies. There IS a price difference: you can buy a big bottle of Old Spice (so I’ve been told by B) for $6.95. But I came to know Chanel No. 5 in its down-market days. When I was very young, Chanel No. 5 was sold at an old country drugstore near my home. On Saturdays, while sipping a cherry Sprite slush or chocolate milkshake, I would wander the drugstore’s aisles — browsing the comic book carousels or smelling the perfumes that were displayed in a garish mirrored alcove. In those days, Chanel No. 5 shared shelf space with White Shoulders, Charlie, Jovan Musk, Emeraude and Old Spice; Chanel No. 5 wasn’t “luxe” at all. (Around the same time, a friend’s mother kept her bottle of Chanel No. 5 on the toilet tank lid, alongside a Renuzit solid air freshener, tissues, and a hairy hairbrush; beware — first impressions are hard to forget!)

Old Spice and Chanel No. 5 are often referred to as “old fashioned” fragrances, fragrances that many perfume lovers find hard to wear because of their popularity, their “vintage” aura and their instant recognizability. As I tried Old Spice for this review, I wore it at home (not in public) for fear of being sniffed and “outed” — “Everyone! Come quick! The picky Kevin S is wearing OLD SPICE!!! HA! HA! HA! HA!” I can imagine my friends’ laughter now!

When B presented me with a bottle of Old Spice, I poured the scent onto my skin from the bottle. I smelled — carnation. I was surprised; I had imagined I would smell a manly ‘bay rum’-type scent. I put some Old Spice into an atomizer bottle and sprayed it on. Sprayed, the fragrance seemed more complex; I detected the aldehydes, carnation/clove, spicy cinnamon, a peppery accord, and a bit of vanilla and “faded” wood. Overall impression: NICE!

A woman could certainly wear Old Spice; it smells like a carnation-themed Eau de Toilette. I have a love-hate relationship with carnations. I love the flowers and their natural scent in the garden and I use carnation-scented soap and home fragrance products on occasion but I usually dislike carnation in perfumes where it can be overwhelming and stifling. Old Spice is a clean/soapy, spicy-floral fragrance and it smells better than some carnation-scented room sprays I’ve bought that were 10 times Old Spice’s price. I can imagine myself spraying on some Old Spice, at home, on an ice-cold day; I don’t know why, but to me carnation smells best in winter. 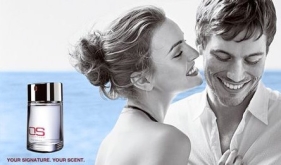 OS Signature was released in 2006 and contains lime, grapefruit, pine, marine accord, coriander, cedar wood, patchouli. OS Signature is honestly described on its website as smelling like a “shockwave of electricity”, a “burst of freshness”; it has a “high energy top note” that produces a “cool shiver” in the wearer who feels “clean, fresh.”

OS Signature’s frigid “marine accord” envelops and overpowers the other notes; apart from the aquatic accord I smell only a hint of citrus/pine and some cedar. That being said, at $10 a bottle OS Signature smells as good as most of its aquatic/ozonic cousins that crowd the men’s fragrance counters at Nordstrom and Macy’s and sell for $55 or more.

I’ve learned a few things while sampling Old Spice. First, just because a fragrance is inexpensive doesn’t mean it has to smell cheap. I was also pleasantly surprised when Old Spice, the classic mass market men’s fragrance, turned out to be a spicy-floral! Finally, the old ‘dame,’ Chanel No. 5, mixes well with the ‘man’s man’ — Old Spice. So what if he’s 16 years her junior, they still have a lot in common.