I’m reviewing the “bookends” of the Ralph Lauren Polo men’s line of fragrances: Polo (1978) and Polo Explorer (2007). Though I’ve bought lots of Ralph Lauren products over the years, everything from paint to jeans to a pair of canary-yellow-and-lime-green cowboy boots (hey, I was 19!), I have only owned (and worn) one Ralph Lauren fragrance: Monogram (1985). I remember Monogram as a quiet, slightly powdery, wood scent with beautiful blue juice. Monogram was suddenly discontinued (some conjecture the blue coloring in the formula caused allergic reactions on skin). Since Monogram, I’ve never been tempted to buy a Ralph Lauren cologne.

I approached the original Polo fragrance with an open mind: I’ve never worn it and have never known anyone who has worn it. After reading comments and reviews of Polo on other blogs, I know that many men make fun of Polo and refer to it as either the ultimate WASP fragrance or a scent that conjures “the wild excesses of the late-Seventies and Eighties” — what a disparity in imagery! (I guess one of those handsome, preppy polo players could have hopped off his pony after a match at Meadowbrook Polo Club and continued sweating and breathing heavily at Studio 54?)

The scent of Polo reminds me of a “tragedy” I witnessed years ago. I have a friend here in Seattle who loves her garden but hates yard work. One day, she found a flyer in her mailbox: “Master Gardener: Let me Get you’re Garden in Shape! hourly rates apply.” The flyer was illustrated with a 1950’s-era photo of a desert garden, replete with cacti and succulents. My friend hired the Master Gardener and left him at her house as she went to work. When my friend returned home that afternoon with me in tow, we were astounded at what we saw: the gardener had not only mowed the lawn and weeded the flower beds (my friend’s only requests), he had pulled up a good number of healthy plants he assumed were “intruding” — daisies, white cosmos, and some poppies and marigolds on the verge of blooming. The Master Gardener had also severely pruned my friend’s lush arbor vitae, her (once) graceful cypress trees, junipers, pines, and a cherry tree that was, pre-pruning, fit to be the subject for a Chinese landscape painting. All over my friend’s yard were tall fragrant heaps of branches, leaves, cut grass, and dying, wilting plants; her yard looked awful, but smelled great.

Perhaps perfumer Carlos Benaïm came across a similar scene and was inspired to create Polo? Polo’s bold opening smells of mixed vegetation — grass, daisies and dandelions, crushed juniper berries, ‘green’ wood, waxy pine needles (and sap). Halfway through Polo’s development an “apothecary green” scent emerges: it’s as if the juice from all those plant materials had been blended into a petroleum jelly base to create a miraculous aromatic body rub: “Apply on knees, ankles, elbows to cure joint pain!” As Polo’s greenery fades away, a silky-sweet, slightly musky talc note becomes apparent and combines with a mellow cedar accord to produce a soft, soothing finale.

I like Polo: beginning, middle and end. Polo maintains its freshness from the top notes to the base notes and it has outstanding lasting power and sillage; I would think a small bottle of Polo would last ages since only a few sprays are necessary — and advisable — per application.

*I wish Ralph Lauren would use the Polo formula in limited edition, scented holiday home fragrance products: candles, room diffuser oil and room spray. Who in the fragrance industry made the executive decision in the last five years or so that Christmas smells like cinnamon and orange peel? No! Christmas smells of the forest…bring back the pine, cedar, juniper, holly and ivy! 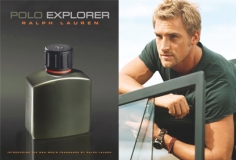 “Inspired by life without boundaries, Polo Explorer is a fragrance for men with a thirst for adventure and discovery.”

Note to Polo Explorer ad committee: we ALL need boundaries; the people I know who ignore “boundaries” are obnoxious — or ‘ill’. And if you are talking about the smell of “life without boundaries” — I suggest a scent that is brazen, a bit crazy, brave and forceful.

Using a travel theme for this scent of “adventure and discovery,” Polo Explorer has assigned a locale to each of its ingredients: Hawaii (aquatic accord), Australia (sandalwood), Indonesia (patchouli), Russia (coriander), Cuba (mahogany), Sicily (bergamot), South Africa (mandarin) and the North Sea (amber...as if nuggets of fossil resin were put into the fragrance!) We’ve all come to expect such silly ‘fantasy’ from contemporary perfume advertising.

I tried Polo Explorer on four occasions over the course of a month because the first time I tried it I was sure either my nose or my perfume sample was “off.” But on second and third and fourth tries, using my same nose, but different samples and bottles of the fragrance, I got the same results. Polo Explorer starts with an artificial smelling “fresh” (part ozone-part aquatic) wood accord, and where Polo Explorer starts…Polo Explorer ends. The fragrance seems to be created from a single scent molecule: ‘fresh wood accord’. The only developments Polo Explorer provides are these: it fades from your skin over the course of a few hours and as it fades it smells “stale.”

After reading Polo Explorer’s ingredients announcement and its online promotion (which includes a chance to win a trip to Machu Picchu), I was expecting much more from the cologne, but Polo Explorer is about as exotic and exciting as a trip to the local discount mall, the mall that’s wedged between two freeways in the middle of nowhere. It’s a shame that Ralph Lauren didn’t go for broke with this fragrance and create something truly thrilling, full of personality, and awash in rich ingredients from around the world. The almost-30-year-old Polo is energetic and alive. Polo Explorer? It’s spent, world weary.