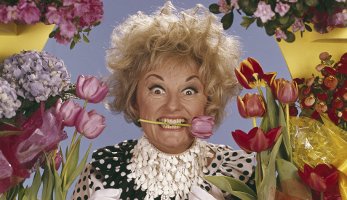 Not long ago, I showed a coworker a painting hanging outside my office door. It’s of a vase of daisies in a garish gold frame. “Phyllis Diller made that,” I told her. Thomas Lauderdale of Pink Martini managed to wrangle an audience with Diller not long before her death, and she donated the painting for a charity auction hosted by the AIDS service organization I work for.

“Who’s Phyllis Diller?” my coworker asked. I was flabbergasted. Sure, the coworker is in her early 20s, and Diller hadn’t exactly been in the public eye for a while, but to me Phyllis Diller was as much a part of American culture as Mount Rushmore. Or at least the Corn Palace.

Over the next few days, my thoughts turned to perfume. Would this coworker recognize another classic, Guerlain Shalimar? Nope, she’d never heard of it. I didn’t have the heart to do a smell test. I had the feeling that the civet funk of the vintage Eau de Toilette wouldn’t impress her.

That day I learned a lesson the perfume industry has already taken to heart: many people don’t know the classic fragrances anymore. Sure, they’ve heard of Jean Patou Joy and Chanel No. 5, but they probably couldn’t identify them by smell. And they most likely wouldn’t be impressed if they could.

A few decades ago, when new fragrance launches were much less common and women wore their signature perfume for life, people revered Christian Dior Miss Dior and Givenchy L’Interdit. Even the average high school graduate knew that bottle of Worth Je Reviens at the Bon Ton department store deserved a prime spot on the vanity.

Today, the number of perfume literate is dwindling. The perfume industry has reacted by “modernizing” the classics, and as a result too often turning them banal. Maybe Chanel No. 5 Eau Première is an exception, but Chanel Coco Noir and Chanel No. 19 Poudré pander to the love of fruit and easy florals. Christian Dior Miss Dior usurped the old Miss Dior completely after slyly approaching as Miss Dior Chérie. L’Interdit went through a fruity phase before the Les Mythiques version came out, and that one seems to be discontinued. Je Reviens is a bottom-shelf Walmart refugee these days, if you can find it at all.

Even Shalimar has been monkeyed with through Shalimar Parfum Initial and Ode à la Vanille and a bunch of Shalimar “lites” in attempts to make it more likeable for the inexperienced perfume wearer. These are simply the fragrances I think of off the top of my head. There are dozens more.

Perfume illiteracy does have one advantage in that it’s easier to wear classic fragrances and not fear you’re a cliché. For years I would only wear Shalimar at home, because it is so Shalimar that I didn’t want people to sniff it and tune me out. Now I’m starting to think I’ll smell daringly original.

But, how “classic” are the perfume classics if they’re losing their audience? Will these gorgeous, challenging old perfumes go the way of, say, Mozart’s Magic Flute, something the everyman enjoyed when it came out, but now appreciated best by someone with patience, experience, and the money for a ticket price that could buy a week of groceries?

Perfume isn’t always easy. With all the fruity, patchouli-laden, clean musk-streaked fragrances out there, what incentive do consumers have to reach for the admittedly freaky but oh-so-beautiful Guerlain L’Heure Bleue (let’s not get started on L’Heure de Nuit), let alone Guerlain Jicky? Still, it’s immensely rewarding to develop your nose and learn what you truly love to smell, even as you’re challenged along the way.

We can argue about whether or not Phyllis Diller really was a classic, but you should know she wore Guerlain Chamade. Plus, she understood the value of perfume. As she said, “I’m looking for a perfume to overpower men. I’m sick of karate.”