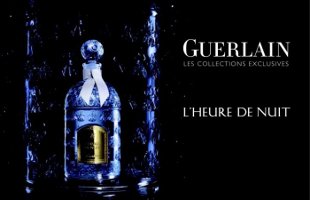 Guerlain L’Heure Bleue is the rare fragrance with an undeniable signature. It is sweet and romantic but freakily medicinal, too. It has just as much presence as one of Guerlain’s other singular fragrances, Shalimar. But like the shape-shifting light between day and night, the time for which the fragrance is named, L’Heure Bleue’s mood is less mysterious than Shalimar’s and more magical.

In Thierry Wasser’s modern interpretation of L’Heure Bleue, he’s bumped back its eponymous time a few hours and called it L’Heure de Nuit. After smelling L’Heure de Nuit, I would have named it for a cheerful part of the day, a time filled with sun and cake. Maybe L’Heure de Your Coworker Brought In Cookies This Morning. Or, given L’Heure de Nuit’s streak of clean musk, L’Heure de Laundromat.

Among L’Heure de Nuit’s notes are bergamot, orange blossom, iris, heliotrope, jasmine, rose, musk and sandalwood. Somehow, the perfume’s components meld to smell like a floral marshmallow dusted with peppery spice and soap. I don’t know much about making perfume, but L’Heure de Nuit smells like it must have been tricky to pull off. Wasser somehow created an unusually plush texture.

As L’Heure de Nuit wears, it becomes sweeter and simpler but doesn’t thicken or smell like a dessert buffet. It lasts a good six hours on my skin, a little longer than the L’Heure Bleue Eau de Parfum I’ve been testing it against.

I love how strange, soft, and intelligent L’Heure Bleue is. It’s a moody bombshell in horned-rim glasses. L’Heure de Nuit is also soft, but it wears its glasses with a self-consciousness that strips the fragrance of its wit. L’Heure de Nuit is lighter, prettier, more streamlined, and less freaky than its inspiration.

For me, L’Heure de Nuit was fun to smell, but I’d rather wear L’Heure Bleue any time, hands down. For a L’Heure Bleue homage, I prefer Parfums de Nicolaï Sacrebleu with its pulpy fruit and incense. If you’re attracted to L’Heure Bleue but find it too strange, do try L’Heure de Nuit. You’d better have a full wallet, though. Given its price ($270 for a 125 ml bottle of Eau de Parfum), I’m surprised L’Heure de Nuit seems so clearly targeted to a younger market.