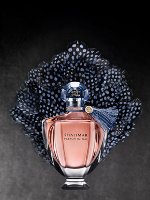 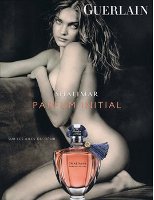 Guerlain has done flankers of Shalimar before (Shalimar Ode à la Vanille, Fleur de Shalimar, Eau de Shalimar, Shalimar Light and Shalimar Eau Légère, to name just the ones I've posted about). They tend to make some perfumistas cranky, because, well, it's Shalimar, right? It's like messing with the Mona Lisa or something.

But sometimes they're quite nice. Many people, including me, liked the recent Ode à la Vanille, although personally I agreed with Kevin that regular old Shalimar was still the better fragrance. I very much liked Shalimar Eau Légère despite the fact that it was clearly Shalimar aimed at people who most probably wouldn't wear real Shalimar: younger people, perhaps, or just people who liked lighter, cleaner fragrances.

Shalimar Parfum Initial, the latest, ups the ante: it was reportedly developed by Guerlain house perfumer Thierry Wasser at the request of his niece, who wanted a Shalimar she could wear. I took her request to mean that Eau de Shalimar, the latest of the "Shalimar, lightened up" flankers, was perhaps a bit too mature — or just not trendy enough? — for her 17 years.1 As you can see, for Shalimar Parfum Initial they've modernized the outer trappings as well: the bottle is the one recently designed by Jade Jagger, and the juice is now the requisite pink.

Shalimar Parfum Initial, as it turns out, is not a pinkified Shalimar. In fact, it's only vaguely related to Shalimar, and it's not as youth-oriented or trendy as you might expect. Nor is it another in the "Shalimar, lightened up" series. Wasser had said he took out the notes that he thought might be intimidating to modern consumers, but I would say he rethought Shalimar far more than that implies. All that remains of Shalimar are those basic elements required to tie it back to the original.

It's a very soft, powdery iris-y floral with a mostly clean woody-musky base. There is citrus in the top, but it has nothing like the rush of bergamot and lemon that opens Shalimar. Like many — really, most — modern citrus openings, it feels flat instead of sparkling, and it stays that way for the duration. The heart is a quiet floral, every so slightly sweet, ever so slightly almond-y, with a hefty dose of iris, and the dry down is an ambery vanilla with Shalimar's dirty bits replaced by a clean white musk. It's not as dark, smoky, rich or vanillic as regular Shalimar.

I find it an odd bird, and not at all what I expected. It does not strike me as particularly young — the dewy Idylle, to name just one, feels miles younger. It doesn't follow any trends that I can see, except the general trend against the sort of notes that made the original Shalimar feel mysterious and sexy and sophisticated. Yet it does not, like Shalimar Light et al., smell like Shalimar rendered easier to wear. It's something else entirely, and whatever that something else is, I don't find it all that compelling. I finally gave up wearing it next to the various incarnations of Shalimar — it could not hope to impress me in such a grouping — and wore it next to a few recent (mainstream) quiet powdery florals. Next to Balenciaga Paris, Love, Chloé and Hermès Eau Claire des Merveilles, Shalimar Parfum Initial seemed even more pointless — I found it easily the least appealing of the bunch, and it's no more wearable or modern than the others. The exercise simply served to remind me that I really do like Eau Claire des Merveilles, and for that matter, I wouldn't at all mind owning small bottles of Balenciaga, Paris and Love, Chloé. And I used to dislike powder, mind you.

Given how many almost-Shalimar flankers we've already seen recently, a total rethinking of the subject does not strike me as a bad idea, but Shalimar Parfum Initial simply isn't pretty enough, or interesting enough, or Shalimar enough, to fit the bill.

Guerlain Shalimar Parfum Initial features notes of bergamot, orange, green notes, fruity notes, rose, jasmine, iris, patchouli, vetiver, vanilla, tonka bean and white musk. It is available in 40, 60 and 100 ml Eau de Parfum. It is out now overseas, and is due to launch in the US in late summer or early fall.

1. In the world of perfume marketing, of course, where the vast majority of product is geared at women under the age of 25, 17 is already middle-aged, and the commercial, starring a naked-as-a-jaybird Natalia Vodianova, is hardly (I hope) aimed at the usual pre-teen cohort.