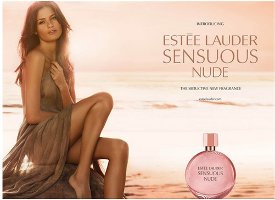 Sensuous Nude is the second and most recent of the flankers to Estee Lauder's 2008 fragrance, Sensuous; it follows 2010's Sensuous Noir.  I will readily admit that I don't pay much attention to trends in perfumery, despite spending so much time reporting on new releases. I notice the big things: everybody who wants a piece of the high end niche market is doing oud, fruity florals and modern chypres are still the staples of the mainstream women's market, the men are still getting more bland sport fragrances than anybody could possibly need or want. Fifty-odd years after perfumer Edmond Roudnitska complained that perfumes were getting too foody, gourmand elements are still all the rage on both sides of the aisle. Up and coming, on the women's side: powdery sheer skin scents, à la Cartier Baiser Volé, the Prada Infusions (and L’Eau Ambrée), Balenciaga Paris, Love, Chloé and Hermès Eau Claire des Merveilles.

Sensuous Nude falls into the latter group; you could probably already guess that from its reported inspiration: the "intimacy of touch and bare skin".1 It makes a real change from Sensuous, which had some sillage (although I thought of it — and wore it — as a casual skin scent anyway), and even more so from the darker, spicier, woodier Sensuous Noir. The original Sensuous is still lurking in Sensuous Nude, mind you, just (much) quieter, paler and drier. The opening is fruitier (or the fruit just stands out more on the lighter base), and there seems to be a slight trail of the woody coconut from Bronze Goddess tagging along in the dry down, giving it a summery, but not really suntan-oil-ish, feel. Otherwise, it's a soft, powdery musky woods, lightly sweet (caramel-vanilla), lightly salty.

Sensuous Nude is highly wearable, although I'm struck by the fact that it might be hard to make a "difficult" powdery skin scent. Like Sensuous, it has a casual aura, more so than the others in this category — it isn't as quirky as Balenciaga Paris, or as polished-to-the-hilt as the Cartier or Chloé entries. It's more laid back, and although I find Sensuous just fine in hot weather, Sensuous Nude might be an even better fit for a summer go-to perfume.

Sensuous Nude is really quite light, and in certain environments it induced serious olfactory fatigue — worn next to Sensuous, Sensuous Nude virtually disappeared, making comparisons somewhat difficult (I did better spraying them both on paper and taking them outside in the heat and humidity). That said, I found that a couple good sprays had very good staying power, I just wasn't always able to smell it.

I like Sensuous Nude. Still, I can't see needing too many fragrances in this category. I already own the Hermès, and as I've said, I'd probably buy Balenciaga Paris and/or Love, Chloé if I found a cheap travel-sized bottle somewhere. Sensuous Nude is a bit farther down on my wish list, but if I happened upon a 15 ml (which so far as I know, they don't make) for $20 or less (not likely), I'd be sorely tempted. 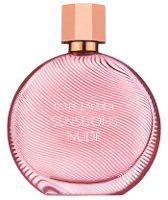 1. And, as an aside, I'll admit that when I first sprayed it on, I got a little worried: I like the new powdery skin scents, and I'm sick to death of fruity florals and fruity chypres, to say nothing of oud, but a little restraint on the part of the fragrance industry (as if!) would be welcome here. I can just see myself rolling my eyes as I smell the 20th powdery skin scent of the year.