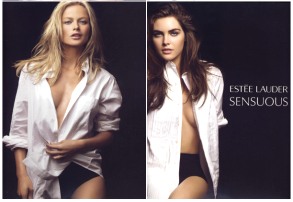 Sensuous is the latest feminine release from Estee Lauder. It launches this month under the tag line "Every Woman Wears It Her Way"; to drive that point home, four models representing different age groups (Gwyneth Paltrow, Elizabeth Hurley, Hilary Rhoda and Carolyn Murphy) are featured in the fragrance advertising.

According to Karyn Khoury, Estee Lauder's Senior Vice President of Corporate Fragrance Development, Sensuous hopes to "re-invent the idea of feminine woods". Noting that feminine wood fragrances have typically been restricted to the niche sector and that woods can be too "dark and solid" to appeal to women, Khoury's brief called for something less ponderous:

For Sensuous we imagined a fabulous wooden sculpture, and wondered, if you could take all that sleekness, all that sensuality, but then melt it so that it was fluid, almost like a river of wood, what would that smell like?*

The resulting fragrance, which was developed by perfumer Annie Buzantian, features notes of ghost lily accord, magnolia, jasmine petals, molten woods, amber, sandalwood, black pepper, juicy mandarin pulp and honey. It starts out rich and syrupy and sweet — it is vaguely reminiscent of the spiced stewed fruits opening that characterizes so many Serge Lutens fragrances, albeit done here in a lighter, less exotic cast — and for a brief time I was puzzled as to why on earth they would launch such a thing in summer.

Sensuous calms rapidly, though, and the result, while not exactly sheer, is much lighter than you might expect from the opening. What you smell about 20 minutes in is for the most part what you'll smell for the remainder of the experience (and the lasting power is excellent, so you're going to smell it most of the day): it is very nearly linear. I would describe it as a honeyed amber woods, no more than middling dark, no more than middling sweet. It is a stylized portrait of woods; that is, it doesn't smell like any particular wood, and while the heart has a floral character, it doesn't smell like any particular flower either (Khoury described it as having an "atmospheric floralcy", and that's about right).

Sensuous is extremely smooth and polished — absolutely nothing ruffles the surface once the top notes have faded off — and so while it has some sillage to it, it wears almost like a skin scent. The danger with such a thing, I suppose, is that it could too easily veer off into dull, but I did not find Sensuous dull at all. It is one of those rare scents that I'd call pleasant and wearable and interesting, and it seems likely to appeal to niche-snob perfumistas as well as the general public; more to the point, it smells great. It wore beautifully in the (disgusting!) heat wave we're experiencing on the East Coast this week, and although I haven't had time to play with it yet, I have a feeling it will lend itself well to layering. It's easily my favorite mainstream launch this year (although granted, it is not like the competition has been exactly fierce). 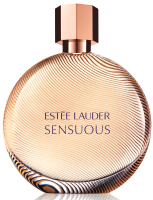 The bottle, I suppose, is fine. It has a wavy ribbed pattern on the back that lends some interest when seen from the front. But there's nothing fabulous (or fun, or sexy) about it; you don't look at it and think Wow, I need me one of those as you might with say, Marc Jacobs Daisy or Burberry The Beat, nor does it have the same kind of classic appeal as last year's Estee Lauder Private Collection Tuberose Gardenia. To me it looks dependable but dull, which is a shame. Props to Estee Lauder, however, for the 30 ml size — we perfumistas love small bottles, and this one is very reasonably priced at $39.50.

Estee Lauder Sensuous is also available in 50 and 100 ml Eau de Parfum and in matching body products (so far, Shower Creme and Body Lotion). A 7.5 ml Parfum (extrait) will be added to the range later. Sensuous is currently exclusive to Bloomingdales; it goes into wider release in mid-June/early-July, at which point it should be at Estee Lauder counters everywhere.

* Note: all quotes via moodiereport.