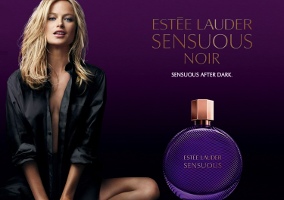 Sensuous Noir is one of two flankers from Estée Lauder this summer, the other being the Pleasures Bloom that Angie reviewed yesterday. I have always had a soft spot for Pleasures: whenever I smell it I am brought up short again by how great it smells, and it's so much better done than the many other squeaky-clean florals of its ilk. Still, I have absolutely no desire to own or wear it. Sensuous is another matter. I would not argue with anybody who said Pleasures was the better fragrance of the two, but Sensuous was the one I bought. The pale honeyed amber works perfectly as a casual, not-quite-oriental (and not particularly sensuous) fragrance and wears well in almost any weather; it is one of my (many!) "what to wear when you don't want to think about what to wear" scents.

Sensuous Noir, I take it, is supposed to be the sexy, evening-wear version of Sensuous. Estée Lauder is calling it a woody chypre, but prior to the recent fashion of calling anything with a clean patchouli base (and this patchouli base is very clean) a chypre, it would surely have been classified as an oriental. It's darker and woodier than Sensuous, and a bit spicier and creamier. The florals seem more prominent, and the honey less so, although it's only marginally less sweet than Sensuous (think less honey, more candy). It's heavier — and less casual — but I don't find it any sexier than the original; if the reviews at the Estée Lauder website are to be believed, many consumers disagree with me on this point.

I don't mind Sensuous Noir — it's perfectly wearable, and as usual Estée Lauder has done a good job — but it doesn't really appeal to me: for one thing, it feels less distinctive than Sensuous, given that there isn't exactly a shortage of these sorts of modern (clean) woody chypres floating about the last few years. Still, if you need such a thing, it's worth a shot.