It was a long and eventful summer, and I have fallen terribly behind on reviews. In the interest of saving time and catching up and all that, here are brief reviews on three scents that are nice enough but that did not interest me enough to write longer reviews anyway. How's that for an enticing lead in? 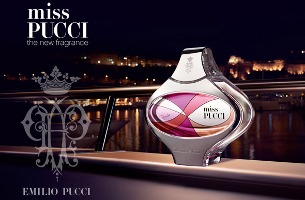 A light sparkling floral musk from the folks at Pucci. It is pretty, clean, safe, and geared towards a young audience (that is, an audience that likes their florals pretty, clean and safe). Like its predecessor, Vivara, it lacks the verve and punch of the fashion line, but hey, that's true of nearly every designer perfume ever made. Miss Pucci in particular fills the same slot as, say, Gucci Flora or Guerlain Idylle, although I do not like it as well as either of those, and I did not like either of those enough to buy in the first place. I do like Miss Pucci a tad better than Vivara: if they had put Miss Pucci in Vivara's fab bottle, I might have been forced to buy it. 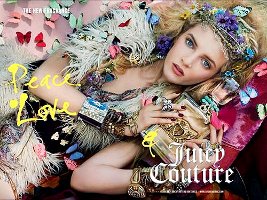 With the exception of Couture Couture, which I likened to some "sort of alcohol-based product scented with grape Kool-Aid", Juicy Couture has done a pretty decent job with fragrance: they're not the stuff of genius, but they're nice enough and the packaging is great fun. The new Peace, Love & Juicy Couture fits the mold. It's supposed to be an homage to "the free-spirited, Sixties-style vibe of Malibu", and what that turns out to smell like is an homage to Chanel Cristalle (the original Eau de Toilette version). In the early stages it's lemony and bright and very green, albeit without the herbal bite of Cristalle; the later stages are more of a fruity floral, not too sweet. The base is just slightly warm, with a pale and very (very) clean patchouli to warm things up.

If you needed a cleaner version of Cristalle but Cristalle Eau Verte did not suit, well, here is your second chance. I do not need any such thing, although if I was forced to choose between Cristalle Eau Verte and Peace, Love & Juicy Couture, I would pick the Juicy Couture: it does not smell so much like air freshener. As things stand, I'm perfectly happy with my Cristalle, thank you. 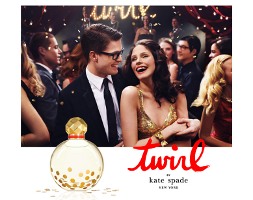 Kate Spade hasn't launched a fragrance since 2002, so perhaps they missed the memo? This is a middle-of-the-road fruity floral with a pale, clean base. It's girly but not too too girly, pink but not too pink, sweet but not too sweet. It's older than say, Vera Wang Princess, but still strikes me as an unlikely pick for the sparkly gold dress and night on the town of the commercial.

Twirl is perfectly pleasant and wearable. There are no surprises here, but then, there probably aren't too many more surprises to be had in this genre, and no doubt many women would prefer not to be surprised by their perfume anyway.