The name of Emilio Pucci’s fragrance Zadig is very close to “zaftig,” and it fits. Zadig is blowsy and lush and sexy, but in a way that isn’t stylish anymore. Kind of like Anita Ekberg. And then there’s Voltaire’s story, “Zadig ou la Destinée,” in which a hermit tells the hero that he must submit to fate. So, by name alone, Zadig evokes passion, fate, history, and good old-fashioned pulchritude. That’s a lot to live up to. In my opinion, Zadig succeeds.

Due to time, my bottle of Zadig extrait has lost some of its clarity and sparkle, but this list of notes matches what I smell: a warm, full floral with restrained fruit and a knot of vetiver-shot cardamom and cinnamon so intense that it would probably put off most casual perfume shoppers. Perfume lovers, though, will be intrigued, and some, like me, will be seduced. The spices are not baking spices, as in Donna Karan Black Cashmere or Laura Mercier Minuit Enchanté. Instead, they’re animalic, fusty, and intense enough to hint at marjoram.

As Zadig relaxes on skin over the next hour, the fragrance — still almost herbal with cardamom and vetiver — eases into warm, barely sweetened base notes with the animalic kick of musk and maybe civet. It’s an intriguing combination of soft-warm-inviting and challenging-earthy. In fact, maybe I should switch that comparison from Anita Ekberg to Anna Magnani.

Zadig is no minimalist perfume, and the women who favored the disciplined green chypres of the era might have been scared off by it. Or not. There’s a certain rigor about how Zadig holds together, too, like a wild but structured pattern in an old rug. Zadig isn’t about prettiness or purity, it’s about beauty.

If you seek out classic, moss-ridden chypres that many people would pinch their noses at, and if Christian Dior Miss Dior (the original, that is) smells enchantingly engaging to you rather than festering, don’t pass up the chance to try Zadig.

I sure wish I could have smelled this one fresh. Perhaps like many cinema bombshells in their later years, my bottle of Zadig has some slack skin on her jaw, and her musculature is not as defined. But Zadig’s allure persists. 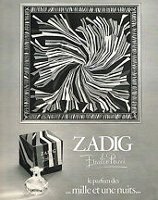 Bonus Pucci shopping tip: If you stumble over a scarf at a yard sale that looks Pucci-esque but is signed by some dude named Emilio, snap it up. That’s how an authentic Pucci garment is marked and how a few smart thrifters have scored the real thing. (Keep an eye open, too, for the fabulous old Leonard of Paris designs that hint at Pucci but have a more angular 1960s flair.)