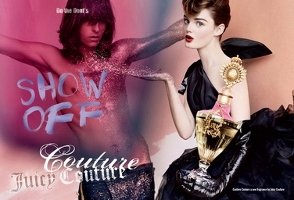 Recently I did a triple review of Ormonde Jayne Tiare, Stella McCartney Stella Nude and Strange Invisible Perfumes Fire and Cream, and I started out by saying there was no common theme to tie the three fragrances together, to which Mals86 responded in the comments that the theme was clearly "Recent Releases: Very Nice, But Didn’t Grab Me" — true enough in the case of the Ormonde Jayne and the Strange Invisible Perfume, although I don't think I'd grace the Stella Nude with even a "very nice". In any case, in the interest of saving you the trouble of reading, I'll tell you today's theme up front — "Recent Releases: Don't Try Them On My Account".

Juicy Couture has done very nicely for themselves with their fragrance line, and the first two entries for women were both well-executed examples of their respective genres — the original Juicy Couture being a nearly perfect representation of a bright perky mainstream fruity floral, and Viva La Juicy of a young-ish mainstream candied floral gourmand. Neither of those are things I care for terribly, mind you, but I can see the attraction.

Couture Couture is another matter. I originally tried it next to the two earlier Juicy fragrances, and my initial reaction was that I didn't love any of the three, but that Juicy Couture and Viva La Juicy at least smelled like perfume, whereas Couture Couture, whilst most definitely possessing a smell, did not. It did, however, smell familiar, and I'm sorry to say that such is the state of my long-term memory that I had to consult the reviews at MakeupAlley to discover the answer: grape Kool-Aid. Now, grape Kool-Aid can be done in such a way that it does, in fact, smell like perfume, and I offer as proof two specimens from the celebrity counter: Baby Phat Fabulosity and Britney Spears Midnight Fantasy. Couture Couture smells instead like some other sort of alcohol-based product scented with grape Kool-Aid. Perhaps hair spray?

I will give the last word to MakeupAlley reviewer nancybotwin, who says that "Couture Couture smells like a cheap knock off version of a Juicy fragrance". Yes, so it does. 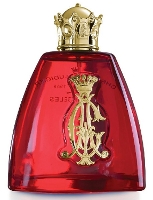 Ed Hardy's first fragrance, Ed Hardy Woman, was a predictable enough fruity floral: competent, but neither interesting nor memorable. The line's second outing, Love & Luck, was something of a happy surprise: it stayed firmly within the "young and fun" boundaries that presumably define the Ed Hardy customer base, but it was more unusual — and fun — than your average youth-oriented fruity floral. I liked it, and was happy to see several people mention it when we did our recent shopping challenge poll.

The third women's fragrance from Ed Hardy, Hearts & Daggers, is described as a "tantalizing, abstract floral cocktail", and I'll vote for the abstract, at least. It's a mishmash of already well-explored trends: it's bright and fresh, with apple-dominated fruits, the usual blur of unrecognizable florals in the heart, and a clean, pale base (the notes: blood orange, violet leaf, apple, mango, apple blossoms, pink jasmine, cashmere musk, amber, benzoin and blond wood). It's pleasant enough, but has nothing to distinguish it from the umptillion other such things on the market other than the fun bottle. It's my least favorite Ed Hardy scent so far.

Christian Audigier, the designer behind the Ed Hardy fashion brand (the official name of the line is Ed Hardy by Christian Audigier), launched his first fragrances under his own name earlier this year. I did not try the men's, but the women's is a puzzle, and the brand's ad copy ("inspired by the woman who can't get enough of Christian Audigier's designs so when she goes out at night her finishing touch is this fragrance") doesn't jive with the bland, vaguely coconut-ty juice. It's been widely compared to Juicy Couture's Viva La Juicy,1 but I'm willing to bet that Juicy Couture invested a few more pennies in the juice: the Christian Audigier version starts flat and goes downhill from there, and the low-end glam bottle can't compete with Juicy Couture's packaging (admittedly also low-end glam, but far better executed and way more fun).

1. Paris Hilton Siren was also widely compared to Viva La Juicy, and I meant to try Siren and Christian Audigier together, but life is short. I will note that Siren is ever so slightly cheaper than Christian Audigier, but if you shop the discounters, you can find the Viva La Juicy itself for a reasonable price — as of this writing, a 50 ml bottle is $51 at FragranceX. In this case, it might be worth saving your pennies for the real thing.