Either I am feeling extra jaded lately (a very distinct possibility) or there are even more frogs* than usual crowding the department store perfume counters this spring. Today, I've got quick reviews of two recent mainstream fragrances (Oscar de la Renta Something Blue and Kate Spade Live Colorfully), but as neither is likely to set perfumanity on fire, I'll go ahead and put my quick poll question at the start: have you smelled any really great new mainstream scents this year? Do tell. If you can't think of any, go ahead and tell us about a new fragrance that's just comically bad. 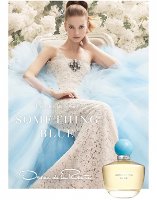 Something Blue is Oscar de la Renta's bridal-inspired fragrance for spring 2013 — the tag line is 'from this day forward' and the bottle includes a removable ring — and as you'd expect, it's a romantic floral. The opening focuses on one of my favorite floral notes, linden blossom, with accents of lily of the valley and stephanotis as it moves into the dry down. And it is pretty, with a slightly green tinge and just the barest touch of sweetness. "Soft" and "elegant" are the words that appear in many of the online customer reviews, and they're both apt enough.

Something Blue is also clean, not quite but almost soapy clean. It didn't remind me of laundry detergent, really, but it's certainly far cleaner than I'd want for my wedding.

Verdict: it's exactly what it ought to be — it's an entirely of-the-moment mainstream wedding fragrance. If you're looking for just such a thing, and want something that will hang on through the event but not alarm your wedding guests, it is definitely worth a shot. It probably goes without saying that it isn't likely to be a perfumista favorite, right? Another mainstream alternative, more strongly floral than this, is the old standby Vera Wang for Women (the original 2002 version) or if you want something stronger still, there's always Estee Lauder Beautiful. Or, check out Angela's article on Wedding Perfumes.

Oscar de la Renta Something Blue was developed by perfumers Frank Voelkl and Ilias Ermenidis. The notes include bergamot, mandarin, neroli, linden blossom, stephanotis, lily of the valley, narcisse, lychee, cashmere woods, ambrette seeds, vanilla and white musk. It is available in 50 and 100 ml Eau de Parfum, and in a matching candle. 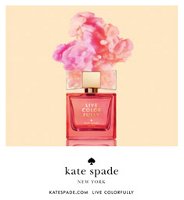 Live Colorfully is the latest from Kate Spade. It's the brand's second scent under licensing arrangements with Elizabeth Arden — the first was the eminently forgettable Kate Spade Twirl, and possibly that explains why this one was done in-house, with the assistance of consultants Fabrice Penot and Edouard Roschi of Le Labo and Poppy King.

Live Colorfully starts off with some decent sparkle (it makes a nice showing on a blotter) and settles into a light floral with a tropical bent. There's some clean gardenia, and some coconut — but it's not heavy enough to qualify as suntan lotion, really; if you want beachy, you might better stick to Estee Lauder Bronze Goddess. Live Colorfully is slightly aquatic, but not overly so, and has a warm and summery woody dry down. It does fizzle out a bit after a few hours, but what doesn't?

Verdict: While I can think of quite a few tropical florals I'd prefer to this one, it's perfectly wearable. Gaia at The Non-Blonde concluded that she wouldn't "...object to smelling Living Colorfully on other people here and there", and I'll go for that. It's better than I expected after Twirl, but maybe not as great as I might have expected given the involvement of the folks from Le Labo. And again, it's not likely to attract a cult following of perfumistas.