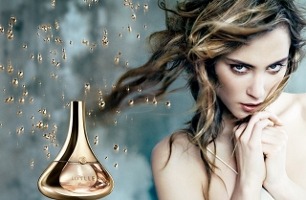 Insolence made reference to Guerlain's past and the brand's famed Guerlinade base.1 Idylle does not, so we can dispense with that right away. Instead, it offers a "contemporary interpretation" of Guerlinade, based on a "chypre signature of patchouli and white musk". I've gone on ad nauseam elsewhere about the modern chypre concept — which apparently means only that you've added a bit of clean patchouli to the base — so I won't belabor the point here, but I will say that there's nothing unusual or striking enough about the patchouli and white musk base of Idylle for it to constitute a recognizable brand signature, far from it — it very neatly marks Idylle as a modern department store fragrance.

It is perhaps not surprising, then, that Idylle has been widely compared on the internets to several existing fragrances. One of those, Sarah Jessica Parker's Lovely, I can vouch for: the clean patchouli-musk base is very similar. Another, Narciso Rodriguez Essence (or according to some reports, the original Narciso Rodriguez For Her), I can't, because I haven't smelled it. A third, Estee Lauder Pleasures, yes, I can see the point there too. Take a bit of the floral blend, minus the soap, from Pleasures, add the Lovely base, and you've got something like Idylle.

But all of that ignores how darned pretty Idylle is. The floral bouquet of lily of the valley, peony, freesia, jasmine, lilac and rose, with an emphasis on the rose, is just lovely. It's sharp and crisp at first, later, smoother and creamier, with soft fruity-jammy undertones. The heart notes are sweet but not heavy — Guerlain calls it a "floral mist", and that's accurate: it's done with a light touch that ties in nicely with the "golden raindrops" theme of the advertising. The dry down is slightly dark, slightly earthy, but without any skank whatsoever, very much in the modern chypre mold. 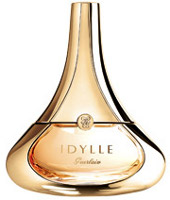 Idylle smells young, and to me, more cheerful than sexy, although if you found fragrances like Yves Saint Laurent's Elle sexy, you might find this sexy too. It's very wearable, and while not earth-shatteringly unique, better done than much of its competition. If you're still trying new Guerlain fragrances with the ghosts of Mitsouko and Shalimar hanging over your shoulder, it's bound to be a big disappointment, but if you're looking for a wearable floral this season and Guerlain is just another brand to you, it's worth a shot.

Guerlain Idylle is available in 35, 50 and 100 ml Eau de Parfum. I do not know where you can find it at the moment in the US; it's supposed to be exclusive to Saks but their website currently says "Sorry, this item is no longer available online."

1. For a brief discussion of Guerlinade, see the review of the Guerlinade fragrance.