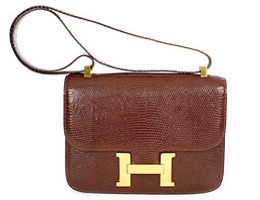 Have you ever thought about matching iconic Hermès handbags with the equally iconic Hermès perfumes? I'd pair Calèche with the classic Kelly bag and Kelly Calèche with one of the new, smaller Kellys in a bright color, say apple green or watermelon pink. Birkin bags are more casual and slouchy, more modern, than the Kelly bags, and I can see the Hermessences suiting a Birkin. Pamplemousse Rose, for instance, would be nice with a pale green or dove grey Birkin bag (although Equipage is a natural for a battered, nude calf Birkin.) To me, 24, Faubourg's match is the Constance. 24, Faubourg's prim, go-anywhere elegance seems made for a woman with a mink brown, gold-buckled Constance slung over her shoulder.

Hermès released 24, Faubourg in 1995. It's named after the address of Hermès's flagship store and is one of a handful of perfumes named after fashion-centric addresses, including Balenciaga Le Dix and Chanel 31 Rue Cambon. Maurice Roucel created 24, Faubourg. Nigel Groom lists its notes as orange blossom, jasmine, tiara flower, ylang ylang, iris, patchouli, vanilla, ambergris, and sandalwood.1

To me, this list of notes is barely a sketch of the full body of 24, Faubourg. If I had only a few words, I'd describe 24, Faubourg as orange flower as seen through amber glass. Really, though, the fragrance is crammed full of warm flowers with a bare hint of spice, but with soapy orange flower at the forefront. Boosting this floral heat wave is a thick bed of sandalwood, amber, musk, and moss. Instead of simply orange flower, we have an orange flower chiffon layer cake made with honey. In 24, Faubourg, Roucel wraps a richly woven blanket around orange flower just as Histoires de Parfume Tubereuse 3 L'Animale did (in my mind less successfully) for tuberose and Patricia de Nicolaï did beautifully but with more restraint for narcissus in Parfums de Nicolaï Le Temps d'Une Fête. 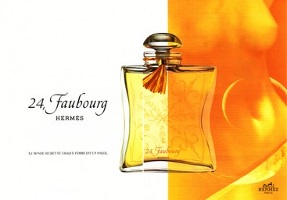 24, Faubourg is rich and full, but I wouldn't call it loud. It's welcoming, almost maternal, but patrician at the same time. Princess Diana's butler wrote it was one of the Princess's favorite fragrances, and its easygoing but remote beauty does seem perfect for her. 24, Faubourg's poise tempts me to recommend it for the mature woman, but I really think anyone with the grace to write thank you notes by hand could wear it well.

Hermès 24, Faubourg comes in Eau de Toilette (including a 400 ml bottle for $400), Eau de Parfum, and Parfum concentrations. Please comment if you've tried the extrait. For information on where to buy it, see Hermès under Perfume Houses.