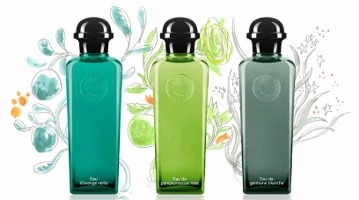 Eau de Pamplemousse Rose (above center) and Eau de Gentiane Blanche (above right), along with longtime favorite Eau d'Orange Verte (in new packaging, above left, and celebrating its 30th anniversary this year), make up the new trio of unisex colognes from Hermès. I went to visit them recently at my local Hermès boutique, and had Pamplemousse Rose purchased and packaged within minutes. One of these days, I need to sit down and figure out the proportion of my perfume spending over the past few years that has been made up of fragrances from perfumer Jean-Claude Ellena — I'm guessing it's substantial, and certainly it accounts for many of my on-the-spot purchases.

But I'll start with the good news: I did not need a bottle of Eau de Gentiane Blanche. Amy Verner, writing in the Globe and Mail1, called it a "haute fresh laundry fragrance, soapy yet subtle", and that's right on the money: it's possibly one of the nicest laundry-clean fragrances I've ever smelled, but there's really almost nothing you could do with a laundry-clean fragrance, haute or otherwise, that would make me want to own or wear it. Gentiane Blanche starts out with bright, orange-y citrus before moving rapidly into a clean musk (the notes: gentian, white musk, iris and incense). I don't know gentian, but Gentiane Blanche smells briefly like lavender to me, then softens into something I can only describe vaguely as "wildflower" and/or "flowering herbs".

Eau de Gentiane Blanche is slightly green, slightly bitter, slightly powdery and slightly root-y. There is more iris than incense in the early stages; later, the incense is more noticeable, and then Gentiane Blanche feels more dusty than powdery. It isn't a heavy scent, but it has reasonable sillage and lasting power for a cologne-type scent, especially if you apply lavishly — as presumably you're meant to. I found it surprisingly enjoyable to wear for a few days, and far more interesting than I expected, but in the end it's still too clean and fresh for me. If you like clean and fresh, do give it a try.

Eau de Pamplemousse Rose, on the other hand, captured my affections instantly. The opening is a bright, effervescent mix of grapefruit and orange, heavy on the grapefruit peel and beautifully tart (other notes: rose, rhubofix, vetiver). It reminded me of a just-poured Fresca on ice. The sparkle doesn't last nearly as long as I'd like, but there you are, and the grapefruit, at any rate, lingers for quite some time. The grapefruit teeters just on the edge of hard-to-wear, as grapefruit is wont to do; most of the times I wore it, there was just the slightest undertone of something sweaty in the early stages — not at all unpleasant — but one day for some reason it steered a bit uncomfortably towards Guerlain's Aqua Allegoria Pamplelune. Pamplelune, if you've never tried it, is a fragrance that you can either wear or you can't, and I'm quite firmly in the can't group. I ended up layering something else on top2.

I find the rhubofix (an aromachemical described as having “a zesty freshness and unique green rhubarb effect”) very noticeable on paper, less so on skin, and the rose is literally just a tinge, as though you'd nearly reversed the proportions of Hermès Rose Ikebana. The lasting power is not quite so good as that for Gentiane Blanche, but is still reasonable for a summer cologne, I suppose: I wanted to reapply after a couple hours.

At $125 for 100 ml, the prices are rather high for summer colognes, but at least they aren't so outrageous as the new Eau de Sisley trio.3

2. I can't remember what I layered it with, but I tried it later over Terre d'Hermès and loved that combination. It's amazing how many things layer perfectly with Terre d'Hermès.

3. I was curious how much Hermès charged for the Jardin fragrances, having never paid full price for one, and was surprised to see that they're also $125 for 100 ml. Those, at least, are available in smaller sizes, and are easily found at discount. Hopefully the Pamplemousse Rose and Gentiane Blanche will also be at the discounters soon, but hopefully not so very soon that I'll be mad that I paid full price.