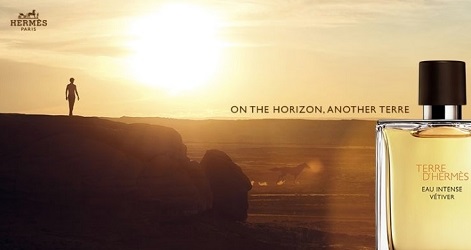 The strength of vetiver mixed with the vitality of the Sichuan pepper and green bergamot. On the horizon, another Terre. Vetiver, inherent to Terre since its origins, is the culmination of this new composition. The initial woody and mineral balance of Terre becomes woody and vegetal.

Terre d'Hermès Eau Intense Vétiver begins with a bitter orange/bergamot blast, with a dash of 'sweat'. Fast on citrus' heels comes pepper, and lots of it. This peppery, tangy/sour citrus opening appealed to me in a big way, and I was about to buy Terre d'Hermès Eau Intense Vétiver just minutes after I sniffed it at Nordstrom. But I held back on an immediate purchase as smart perfume shoppers should always do: those fun opening notes can be deceiving.

I tested Terre d'Hermès Eau Intense Vétiver for three days. On the first two days of wear, I used half a sample each day (about 1 ml of scent); on day three I wore an entire vial (2 ml). Though Terre d'Hermès Eau Intense Vétiver certainly smelled stronger with a larger dosage, it had almost no sillage and stayed so close to my body after the first few hours I had to put nose to skin (or shirt) to smell it. There's nothing truly "intense" about this perfume after its first few minutes of development.

Terre d'Hermès Eau Intense Vétiver is a nice scent, but is like a person you meet for the first time who comes out swinging with witty remarks, easy laughter, sparkly eyes and smiles, but whose energy quickly wanes. The banter, laughs, engaging glances and grins dim, and your interest falters. My perfume cabinet will remain a Terre-Free Zone.