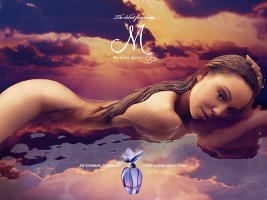 It seems like there was a whole spate of articles not too long ago proclaiming that celebrity fragrances were "over", they weren't selling any more, etc. etc. If there is any truth to the notion, you won't find the evidence at the fragrance counters this month. Mariah Carey is only the latest of celebrity fragrance debuts, and if you mean to smell them all, you've a long road ahead of you yet this year.

Mariah Carey went with the name M. It isn't wildly creative on its own merits, and it seems even less so given that we just got L from Gwen Stefani. Are full words too risky in today's over-saturated fragrance market? What will happen when all the letters of the alphabet are used up? We've already got F (Ferragamo), another L (Lolita Lempicka), S (Scherrer), V (Valentino), XX (Hugo Boss), and probably others that aren't coming to mind at the moment.

The M fragrance itself was developed by perfumers Carlos Benaim and Loc Dong, and is advertised as a floriental with notes of marshmallow, sea breeze accord, Living Tahitian Tiare, gardenia, sheer amber, patchouli and Moroccan incense. Carey said she was inspired by the scent of toasted marshmallow from her childhood and by an incense she bought on the street in Morocco, and noted that "I was never a perfume wearer, because some scents would irritate my skin. But this doesn't, and this is the first fragrance I've ever worn" (via Women's Wear Daily).

As you'd probably expect, M is sweet. The "sea breeze accord" and a little burst of citrus and tart fruit lighten up the toasted sugar in the top notes, but only a little; it is mostly marshmallow. It isn't a heavy scent though, and the gardenia in the heart notes is whisper-soft and blended with other sheer floral notes — it only reminded me of gardenia for a very short time. The dry down is pale musky woods, still fairly sweet, and a smidgen of creamy vanilla. If you go looking for the incense, you'll find it, but it isn't assertive. 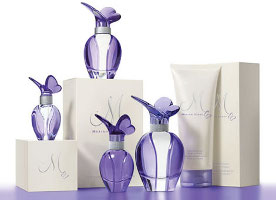 I expected to hate M — marshmallow and sea breeze aren't tops on my list of favorite notes — but I don't at all. It is considerably milder than you'd expect from the notes, and despite the persistent sweetness, it doesn't do much to call attention to itself. I'd classify it as a comfort scent, geared towards a young market but quiet enough that even those who have outgrown candy might find it appealing. Like the vast majority of celebrity perfumes, it doesn't take any risks, so while serious perfume fans may find it too dull to bother with, M doesn't seem likely to offend anyone. I'd be very surprised if it engenders the same kind of love-it-or-hate-it response that Sarah Jessica Parker's Covet seems to inspire.