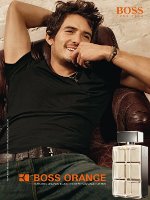 German fashion design house established in 1923. The company initially made worker's clothes, and later, during the war, uniforms. After the war, the company moved into men's suits and then womenswear. Hugo Boss died in 1948; his involvement with the Nazi party and possible corporate use of slave labor during the war created some controversy in the late 1990s. In 1999, the company agreed to pay funds to compensate former forced workers.

2011: Boss Orange for Men, Boss The Collection, Boss in Motion Made For Summer, Just Different

At department stores and online fragrance discounters. Some of the Hugo Boss scents are not formally distributed in the US.

See all articles on Now Smell This tagged Hugo Boss, or take a look at our collection of Hugo Boss videos.