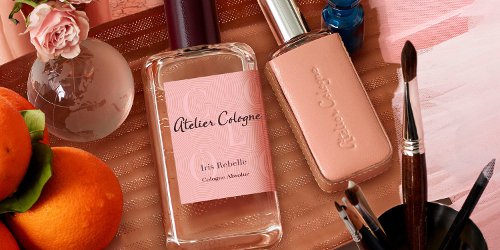 Last month, I walked into my local Sephora, smelled Atelier Cologne's latest, Iris Rebelle, and had a travel spray packaged and paid for within about 5 minutes. Must have been fantastic stuff, you say? Well, it's decent, but I wouldn't go so far as fantastic. If I'd had a sample at home and spent some time with it, it wouldn't even have made my buy list — which, by the way, is a looooong list. There are an awful lot of perfumes I'd much rather own than Iris Rebelle. So why did I buy it?

The long digression, in which I surely repeat things I've said here earlier: My perfume buying habits have changed drastically over the years. In my pre-perfumista days, I generally had a fragrance I wore as a signature; at times, I might have owned two or even as many three fragrances at a time, but that's it, and I usually returned to the same fragrances for periods of years. Over the years, the cast of characters included Diorissimo, Jean Couturier Coriandre, Chanel Cristalle, Yves Saint Laurent Paris, Prescriptives Calyx, Aramis New West (remember that one?), Perfumer's Workshop Tea Rose, the original Halston, and probably others that aren't coming to mind at the moment.

Then in 2003, I wandered into MakeupAlley's fragrance board. By the end of the year, I had my first two niche purchases: Parfums de Nicolaï Balle de Match and Diptyque Philosykos. I might have gone on happily with just those two, but I'd gotten the bug, so to speak, and I spent much of 2004 happily — too happily for my wallet — building my collection. Near the end of the year, I decided I'd better restrict myself to 2 new bottles a month, and in 2005, the same year I started Now Smell This, I stuck to 1 bottle a month. Despite that, by 2009, I had more perfume than I'll ever manage to use up, and I started to take my budgeting more seriously. I brought in Donatella to help me keep track of my purchases.

I did get my spending under control, but even then, I started to worry about the sheer number of mls in my cabinet, and at some point, I can't remember when, I decided I would no longer buy any bottles larger than 30 ml, and that I'd go for even smaller sizes when I could. Since small bottles weren't yet as easy to come by as they are now, and since I won't buy rollerballs, that had a big impact, as did the gradual shift to doing more of my general shopping online: like many others in the US, I stopped spending as much time in malls as I used to. That made an obvious dent in spur-of-the-moment buying. In 2013 and 2014, my expenditures were under $150 a year, and then in 2015, I bought nothing at all.

Buying no perfume at all for year was a lot easier than I thought it would be. In 2016, I did buy again, but everything I bought was 15 ml or under, and all of the scents were things I loved. Ditto with my three purchases for 2017: travel sprays of Bruno Fazzolari Lampblack, Narciso by Narciso Rodriguez Eau de Parfum and Dries Van Noten par Frédéric Malle.

So why did I kick off 2018 by buying a fragrance I had barely smelled and wasn't at all sure I would love? Well, I was stressed, it was winter, I was in a store, it smelled acceptable, it was iris, the box (below right) was pretty, it was small, it was under $30. That's a deadly combination.

So, Iris Rebelle: Atelier Cologne calls it an "inspired blend of fresh iris and lavender enriched with earthy gaiac wood"; other notes include bergamot, orange blossom, black pepper, rose, patchouli and white musk. It's a pleasant, light, powdery fragrance, easy to wear, perhaps not all that rebellious unless you consider the rootier aspects of iris to be rebellious? It is a bit carroty — far too carroty for some, to be sure, but nowhere near the levels of some of my favorites1 — and the dry woods and white musk smooth over the pepper and the earthy elements, and lend a clean edge. It's brighter and cleaner (and less fruity) than the brand's Silver Iris. There is lavender, but it's the usual modern lavender fraction, not spiky at all and you won't likely notice it unless you go looking for it. There is a wispy floral floating through the heart. It's pretty unisex to my nose, and the lasting power is decent enough. 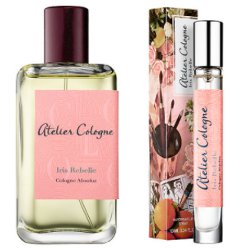 Verdict: It's well done, and if I am not pleased with my purchase, it's only because I already own so many iris fragrances I like far better: for a muted iris, I'd still be more likely to reach for Prada Infusion d'Iris, and when I want carrots, I want Honoré des Prés I Love Les Carottes. (If you want turnips, of course you need Serge Lutens Iris Silver Mist, although for all I know they've reformulated the turnips right out.) Still, I'll wear it, and the travel spray is convenient. If you don't yet have a spring / summer weight iris, and you like carrots, do give it a shot.

1. One reviewer on Sephora notes that "Unfortunately I got a baby carrot smell when I smelled this", only to be chastised by a later reviewer: "I don't know why an adult with a nose would say this smells like carrots. It smells like irises." So!