Dries Van Noten par Frédéric Malle is the first entry in a new collection from the Frédéric Malle brand: XXX par Frédéric Malle, in which Mr. Malle promises to "translate the world of people and brands that [he admires] into scents".1 The Belgian designer Dries Van Noten is up first, and most long time readers could probably guess that I don't know Dries Van Noten from Adam, but after reading in Wikipedia (where else?) that Mr. Van Noten does not do haute couture because "I'm a little naive but I don't like the idea of showing things that you don't sell in a store", he has already stolen my heart.2

Reportedly, it took 18 months for Malle to translate the Van Noten universe into scent, working with perfumer Bruno Jovanovic:

Then I tried to make Bruno understand the essence of Dries’ world. I spoke about the different themes and recurrent materials that my hero often uses: Indian embroidery, XVIIIth century engravings, or the very graphic and colorful prints that he juxtaposes to create unexpected harmony — just like a perfumer does. I also told Bruno about the sober warmth of Flemish people — the world that Dries comes from – the softness of their cuisine and specifically of their desserts like waffles, speculoos biscuits or sugar tarts. I insisted that the sum of these elements generates the unique atmosphere that we needed to convey.3

The result is a modern oriental based on sandalwood — Indian sandalwood, said to be from a sustainable source (other notes: bergamot, lemon, saffron, nutmeg, clove, jasmine, sandalwood, patchouli, violet wood, vanilla, sacraosol, Peruvian balm and musks). The opening is a soft but unpolished (not rough, exactly, just not smooth as the later stages) blend of woods and citruses; the notes settle slowly into a lovely milky wood, pale and soft and lightly spiced. It's not foody and it's no more than mildly sugared, but there's perhaps the vaguest suggestion of those speculoos biscuits, and it has something of a comfort scent aura about it — it almost, but not quite, goes into my own wood pudding category. As it dries down, the transitions are gentle; it does get slightly duskier and edges closer to a floral musk.

The lasting power is quite good, but it's one of those nearly transparent skin scents that's a mood as much as a perfume — that's the "modern" part of "modern oriental", perhaps. Denyse at Grain de Musc called it "surprisingly introverted" and Victoria at Bois de Jasmin found it "surprisingly low key". Certainly, it's more sedate, less risky, less playful, than the fashion. Perhaps because it is so quiet — it forces you to lean in and pay attention — minute changes in wear seemed more noticeable than usual. On some wearings, it was briefly pencil-ish (I like pencil-ish myself), at other times, it veered closer to the waffles than the biscuits and I understood why some wearers apparently found it too sweet.

Verdict: Dries Van Noten par Frédéric Malle is quite likable and easy to wear. Some perfumistas may see that as a backhanded compliment, but it's not meant as one. I'd place the Dries van Noten fragrance in the same class as Diptyque Volutes or Parfums DelRae Panache or Hermès Eau des Merveilles— "a sort of second skin fragrance, something that lingers and pleases without being dull, and without wearing you instead of the other way around", to quote myself. More than once while wearing it, it occurred to me that if I was going to have a signature scent, and really wear it all the time, this is exactly the sort of understated elegance I could live with day in and day out. Still, both the Diptyque and the DelRae made my buy list and the Hermès I actually purchased; this one, I'm still making up my mind. Either way, Mr. Van Noten should be pleased — his fragrance is no doubt vastly better than what he would have under his name if he'd gone a more conventional route. 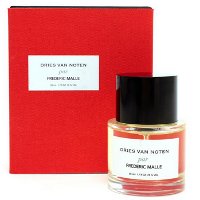 2. Mind you, it only took a few more minutes online to determine that haute couture or no, Dries van Noten does not actually produce any items that I can afford, and that very few of his products are sold online in any case — it is not exactly a "clothing for the masses" sort of brand. Still, it's a nice gesture. When the Dries van Noten for Target collection appears (hey, you never know) perhaps I'll stand in line. I do like that grey coat.