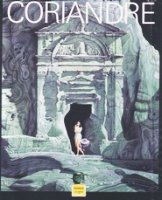 Jean Couturier's Coriandre was my first true signature fragrance. I started wearing it in junior high school (middle school, to many of you) and I stuck to it for rather a long time, although at some point I started wearing Chanel Cristalle on the side, and later still I switched over to Christian Dior's Diorissimo. Nobody else I knew wore Coriandre, which made it the perfect signature scent, and to my then-very-young self, it seemed almost extraordinarily sophisticated.

Coriandre launched in 1973, just a year before Cristalle. Susan Irvine's Perfume Guide lists the notes as coriander, angelica, orange blossom, aldehydes, rose, geranium, jasmine, orris, lily, ylang ylang, patchouli, oakmoss, vetiver, sandalwood, civet and musk; and Irvine describes it as a fragrance "For a red-headed Raymond Chandler heroine. Or an anchorite". I am neither of those things now, and was arguably less so back in junior high, but I simply adored Coriandre. It was highly diffusive and I could not stand it sprayed, so I always bought the splash Eau de Toilette (and always in the smallest size as its shelf life was very poor) and dabbed a little on my wrists and temples. I did not know the term chypre then, but that is what Coriandre was, and I remember it as sharp, dry, and very green (it had a nice bitter leafy edge), with a spicy-herbal kick and an earthy dry down.

I can't say exactly when I stopped wearing Coriandre, but I know I had stopped buying it by the late 1980s. As I mentioned the other day when I picked up a bottle, I've been avoiding trying it again as I figured the likelihood of it smelling like I remembered was about a zillion to one*. First off, memory is funny, isn't it? Second, of course, everything on earth has been reformulated. According to Irvine, Coriandre was redone in 1993, and as we all know, it is hardly likely that it has made it from then until now without further adjustments. And third, as near as I can tell, Coriandre is now a direct-to-discount fragrance. I bought my 33 ml bottle for $7.99, and the 50 ml can be had for around $12. I don't know who currently holds the license to produce Coriandre, but it's a pretty good bet that they're not investing a huge amount in the raw materials.

So I don't know what made me pick up a bottle this past weekend, but I did, and you can probably already guess where this is going. I do recognize this stuff as Coriandre, but it is a mere ghost of the Coriandre I remember. The opening, which I remember as sparkling and vibrant, is now very "fresh", and the greens are pale and soft, with no bite to them. The mid-notes seem rosier than I remember, although that might be because at the time I first wore it, I didn't know or notice (or care) that it had rose at all. The dry down has more powder than I remember, and the earthy notes seem tamer and smoother. It is still highly diffusive, I'll give it that, and it isn't unpleasant, but it isn't what I'd pick for a Raymond Chandler heroine (or an anchorite).

I'm very sorry I tried it at all. As I said above, memory is funny, so for all I know it is remarkably similar to its original self; but it isn't at all how I remember it, and I don't adore it in the least. As a side note, for years I've been hearing people say how similar the original Agent Provocateur fragrance is to Coriandre, and I always thought those people were crazy. Now I see their point, but the Coriandre I remember was only vaguely similar at best.

Jean Couturier Coriandre is easily found online, and can frequently be found at TJ Maxx. It appears to be sold in 33, 50 and 100 ml Eau de Toilette; so far as I know, other concentrations are no longer in production (there used to be Parfum de Toilette and Parfum).

* I should mention that two very kind people have sent me vintage samples, neither of which smelled at all familiar to me.