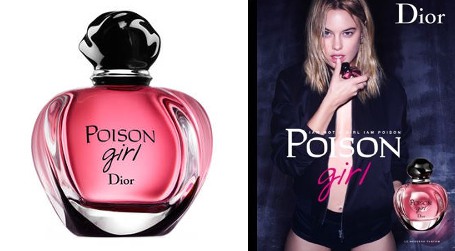 Who else but Camille Rowe could have embodied the alluring and nonchalant femininity of Poison Girl? At twenty-six years of age, and with one hundred and twenty-eight thousand and counting Instagram followers, the model represents a generation of uninhibited, fun-loving, optimistic young women.1

Ah, who else indeed? In case you were wondering how many Instagram followers you might need to front a major youth-oriented fragrance campaign circa 2016, now you know.1 And you know Christian Dior's latest, Poison Girl, is geared young, because they're talking up Rowe's Instagram in the first place, plus she is writhing on a dance floor wearing hotpants and later, strutting around in not even so much as that, whereas Natalie Portman, who fronts the somewhat more "mature" Miss Dior (Ms. Portman is thirty-five), wears Dior couture and smells rose petals and whatnot, plus, she isn't even on Instagram. (Then again, Charlize Theron, who fronts J'Adore and is now forty years of age, has 1.2 million followers.)

So anyway, Poison Girl is geared young, and not surprisingly, it smells like it. It hasn't any real link to 1985's Poison, other than the name and the idea ("I had an idea of youth. A woman who is very strong-willed, almost provocative, maybe even scandalous.")3 It's a floral gourmand, and while it shows a few strands of DNA from 1998's Hypnotic Poison, it's more likely to remind you of the many other modern gourmand prestige fragrances in its class, from Lancôme La Vie Est Belle to Viktor & Rolf BonBon to Yves Saint Laurent Black Opium.

The opening is strong, sweet and pink ("It puts everything front and center right away. Therefore I worked heavily on the top notes so that they would be representative of the fragrance as a whole")4 and smells sort of like cherry-orange-rosewater bubblegum, if such a thing existed, and if it could be done in neon hot pink. Poison Girl is every bit as hot pink as its juice, maybe even more so, and as you'd expect of something done in neon hot pink, it is not quiet about it. The rose-ish floral heart is sweet ("I thought about a sweet treat from my childhood in Grasse, where rose petals were soaked in sugar")5 but not quite so sweet, or loud, as the opening. The dry down is a bit softer still, with plenty of vanilla and undertones of bitter almond, and possibly a dash of bitter cocoa as well.

The lasting power is fantastic. If you put it on, prepare to spend the day with it. The sillage, however, can not quite live up to Poison. There will be a hot pink cloud around you for an hour or two at most.

Verdict: Poison Girl is not perfumista bait, that's for sure, much less old-school-perfumista bait. So I'm not meant to like it, and I feel just fine with the fact that I don't. Modern gourmands don't always leave me cold, though, and in fact the first thing I thought of when I smelled Poison Girl was Diesel Loverdose, which to my (cranky-old-school-perfumista) mind would have been a perfect flanker to Hypnotic Poison, and which struck me as way more fun — and chic, and sophisticated — than Poison Girl. Loverdose Tattoo was fun too. But what do I know? I'm not on Instagram either.

Dior Poison Girl is available in 30, 50 and 100 ml Eau de Parfum. Unless I am mistaken it has not yet officially launched in the US.

2. And as of today, she has 191k. See Camille Rowe’s 10 Most French Instagram Posts if you're wondering what she's up to but can't be bothered to actually get on Instagram.