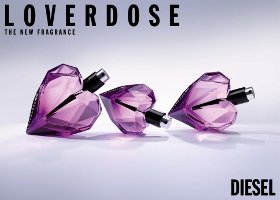 According to Women's Wear Daily, the Italian denim-wear brand Diesel needs to amp up their women's business "following a long period where it became heavily reliant on men’s sales". Expect to see higher prices, better fabrics, more shoes and bags, and a more feminine look. Also key: Loverdose, their latest fragrance and part of their overall strategy to attract "a somewhat older customer than before, between the ages 25 to 55, with a sweet spot of around 30."1

The ad copy for Loverdose is mostly about sex — quelle surprise! — with a splash of rock 'n roll: yes, sex sells, apparently, whether you're 15 or 25 or 35. Loverdose is meant to be a "beautiful but deadly narcotic for the senses" and reportedly it includes molecules that "stimulate the hypothalamus, the part of the brain that induces attraction and desire".2 If it all sounds like the usual fragrance marketing fol-de-rol, luckily, the floriental juice has the same sense of humor as the television commercial, which features model Ashley Smith in a series of more-comical-than-sexy scenarios, and ends with her boyfriend not bothering to wake up when she comes home and kisses him.

Loverdose opens sweet and fizzy, with elements of root beer and indeterminate fruit — it's sort of vaguely what you might get if you crossed Dior Hypnotic Poison with something hyper-fizzy (Jean Paul Gaultier Ma Dame? Ed Hardy Love & Luck?). The heart is a modern, middle-weight licorice floral — in other words, something like Lolita Lempicka Premier Parfum if you replaced the heavy Thierry Mugler Angel base notes with something paler and calmer. Once it settles, it's a lot drier than Lolita Lempicka. The far dry down is a slightly creamy vanilla with a sheer, even-more-slightly powdery finish (a little nod to Love, Chloé, perhaps, or Hermès Eau Claire des Merveilles) over almost-bitter dry woods; by now, there's really only a faint whisper of licorice.

It isn't the stuff of genius, exactly, nor is it outrageously original, but I thought it was great fun, and great fun is not so easily found as you might expect, at least not on the perfume counters. I enjoyed wearing it even though I don't feel any compulsion to go buy a bottle. And hey, that's one fun looking bottle. I have not yet seen it in person, but it's just the sort of thing that might push you over the edge if you were dithering.