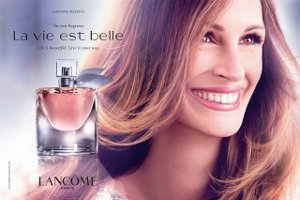 Day to day, week to week, there are fragrance launches, and then there are fragrance launches. Lancôme's La Vie Est Belle is one of the major launches of pre-fall 2012, complete with big-name perfumers, Julia Roberts as its "ambassadress," a gala celebration in the south of France, a soon-to-be-unveiled commercial directed by Tarsem Singh, and more. Lancôme is promoting La Vie Est Belle as its next "iconic" fragrance, hoping it will match Trésor in popularity and longevity as a pillar of the brand's fragrance collection, and no expense or effort has been spared in this campaign.

The fragrance, whose name translates as "life is beautiful," was developed by perfumers Olivier Polge, Dominique Ropion and Anne Flipo. Its composition includes notes of Florentine Iris pallida, iris aldehyde, jasmine sambac, Tunisian orange blossom, Indonesian patchouli, and a "gourmand accord" of vanilla, tonka bean, praline, black currant and pear. According to Lancôme, La Vie Est Belle represents "a new era" and "the choice to live one's life and fill it with beauty." (You can find more information on the fragrance's philosophy at the Lancôme website.)

I was immediately skeptical about Lancôme's assertion that La Vie Est Belle is "the first ever iris gourmand" — what about Guerlain's Iris Ganache, for example? However, it turns out not be be much of an iris-centered composition at all, as far as I can tell. The gourmand accord appears much earlier in the fragrance's development than I would have expected, with a spun-sugar note and a praline effect of chocolate and nuts. Fortunately, it's a high-end dessert accord, Vosges rather than Hershey's. It's a bit sweeter and more feminine than the gourmand element of Les Parfums de Rosine Rose Praliné, for example, but more grown-up than the plasticky chocolate note that shows up in so many celebrity scents. In my favorite phase of the fragrance, these gourmand notes are brightened by an edge of bergamot and given texture by a prickle of patchouli that softens as the fragrance settles down.

I still can't detect iris in the heart of La Vie Est Belle: there's none of the green-tinged woodiness or the chilly silvery feeling that characterize many iris-inspired fragrances. I'm guessing that the inclusion of patchouli is meant to evoke the earthy quality of iris root, but instead it's essentially a gentle, warm patchouli married to some creamy jasmine and a hint of vanilla. The dry down of La Vie Est Belle is something that I'd be tempted to call "Angel with Botox and a blow-out" if I were in a snarkier mood, but instead I'll just say that it's a polished and long-lasting harmony of cocoa and soft patchouli and white floral notes. When I wore La Vie Est Belle on a recent warm evening, it had enough sillage to attract the notice of someone sitting next to me, but not enough to fill the room.

Over the years, I've had mixed reactions to Lancôme's perfumes: I enjoy Trésor and Ô de Lancôme, but I was disappointed in Hypnôse and Miracle. I'd categorize La Vie Est Belle as one of my positive Lancôme experiences, and at the same time I'm guessing that it will be popular with a wider audience. I'd still quibble that it doesn't really "break through traditional codes to invent a new kind of olfactory language," as the promotional materials claim, but it's gracefully composed and it's very wearable, and it's been given an appropriately polished presentation. The bottle designed for La Vie Est Belle (see below) feels heavy and sleek, with convex sides and bevelled edges and the finishing touch of a gray organza ribbon. It has a high quality spray mechanism (yes, these things do matter!) and, in a surprising touch, no logo except for a tiny Lancôme rose etched into the top of the atomizer button. 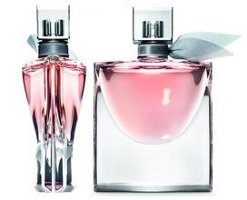 To make a long story short, if you're hunting for your ideal iris fragrance, you might want to re-read some of the many, many previous Now Smell This posts tagged "iris," but if you're in the mood for an accessible new "fleurmand" for fall, La Vie Est Belle is well worth a try.