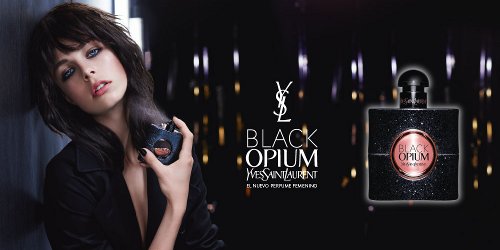 I'm tempted to make this the shortest review ever and simply write, “Interested in Yves Saint Laurent Black Opium? Go buy Chanel Coco Noir or Tom Ford Black Orchid instead.” Black Opium’s vibe is the same as these fragrances, except less sophisticated. Its fruit is similar to Coco Noir’s, except sweeter. Its earthiness hints at Black Orchid’s truffled hazelnut, except muddier. That about wraps it up.

However, I have post to fill. To help you get through it, I’ve bracketed entertaining trivia here and there.

[Speaking of coffee, Honoré de Balzac reportedly ingested the equivalent of 50 cups of coffee a day by pulverizing the beans and eating the resulting dust. To move on to another beverage, Balenciaga is said to have mixed up terrific — and strong — martinis. His secret was to dry the ice cubes before adding them to the pitcher.]

If you’re looking for a coffee-scented fragrance, Black Opium will likely disappoint you. Its coffee is present but plays second fiddle to the fragrance’s whopper dose of vanilla, fruit, and what smells to me like gardenia, although it isn’t listed in the notes. Only the slightest jasmine tingle livens the fragrance, and even the pink pepper seems to have been gobbled up whole.

[In French, pink peppercorn is “baie rose.” The “Pepper Pot Polka” is a good tune to learn if you’re just getting started on the accordion. A pepper pot is actually a stew. The Philadelphia pepper pot is made with beef tripe.]

The other night, I spritzed on some Black Opium and proffered my wrist to friends. This is what they said: “It smells like grape juice,” “Candy shop,” and “Wow, that’s really sweet.” They all liked the name, though. No one picked up its coffee note, and no one added it to his birthday list. I had a plan to wear Black Opium to work and get my coworkers’ opinions, too, but I knew I only had one more trial of this stinker left in me, so I saved to wear writing the review.

[Terms of endearment are often related to sweetness, including Sweetie, Honey, Sugar, and all their many variations. Wallis Simpson, the Duchess of Windsor, supposedly referred to her sister-in-law, Queen Elizabeth, as “Cookie,” because she was plump. The Mitford sisters called her “Cake.” Like Balenciaga, Queen Elizabeth (now the late Queen Mother), enjoyed gin. Unlike Balzac, she probably drank more tea than coffee.]

I’m wearing vintage Opium parfum on one wrist and Black Opium on the other, and to me they don’t relate at all, scent-wise. Opium is commanding, but the fragrance is sophisticated and provides space for you to savor its spicy, floral, and resinous facets. Black Opium is simply loud, thick, and fruity-sweet with a little bit of earthiness to ground it (barely). If you find you like Black Opium, drop by the drugstore to pick up a bottle of Parfums du Coeur Body Fantasies Sexiest Fantasies Va Va Voom! and save a few dollars. If you almost like it, Coco Noir (especially in parfum) and Black Orchid might be better choices.

Yves Saint Laurent Black Opium comes in 30, 50 and 90 ml Eau de Parfum. It’s sold in Europe now and will be available in the United States later this year.