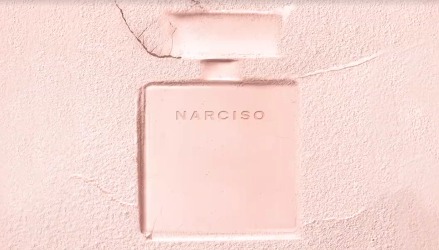 I used to hate (really, hate) powdery perfumes. Now I'm very nearly the opposite: you can take a fragrance that I don't love all that much, give it a nice dusting of powder, and there's a good chance I'll at least like it better. So it goes with Narciso Poudrée, the latest from Narciso Rodriguez, and the latest entry in the current trend of powdered flankers. If they'd dumped a load of powder on Narciso by Narciso Rodriguez, a fragrance I already thought was darned good, I might have been forced to buy it. Instead, they did an Eau de Toilette version that I found distinctly less interesting, and then they dumped a load of power on that.

Actually, this one is tweaked a bit from the Eau de Toilette, which was peony and rose (the original was gardenia). This one promises rose and jasmine (and cedar, musk, vetiver), and it is indeed a more concentrated floral experience, one step back from the "generic pink flowers" of the Eau de Toilette. It has a richer woody musky base, and is less overtly clean in general — and we're back, meanwhile, to Eau de Parfum. The raspy top notes of the Eau de Toilette and the original Eau de Parfum are toned down a bit, the fruit is a bit jammier without quite crossing over into fruity floral territory, and the powder, while heavier than in either of the first two entries in the series, is still very much in the modern mode, that is, a dusting of pale, vanilla-tinged creamy cosmetic powder: a light veil, no more. It might be a bit much in August but it's not a heavy perfume once the top notes settle, nor is it overly sweet. The lasting power is pretty good. 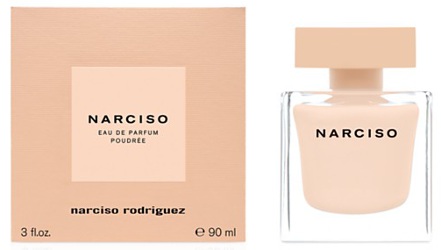 Verdict: I like Narciso Poudrée. It's well done. It's easy to wear, probably more so than the original Narciso, and it's got more oomph than the Eau de Toilette, which was a shade too anemic for my taste. Something of a middle ground, then, but it still lacks the quirky / fun edges of the original Narciso, and while I did enjoy wearing it, there are others in this category I like much better (I'd rather have the sadly discontinued Love, Chloé, for instance). If you're a powder fan, or if you still need a go-to light powder, it's certainly worth sampling, and if unlike me you preferred Narciso Eau de Toilette to Narciso Eau de Parfum, I'd say it's a must try. Plus, the color of the bottle cap and the juice is perfect.